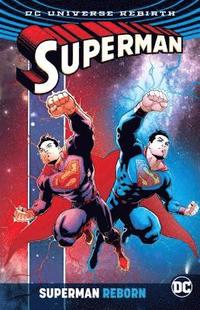 "Delivers an emotional gut punch." --IGN "All the waiting finally pays off." --Newsarama "The mother of all crossovers...Jurgens doesn't miss a beat." --Comicosity

Peter J. Tomasi is a New York Times best-selling author known for his current work on Superman and previous projects Batman and Robin, Superman/Wonder Woman, Batman - Detective Comics, and Batman Arkham Knight, along with other commercially successful books including Green Lantern Corps, Brightest Day, Emerald Warriors, and Nightwing. Over the course of his career with DC Comics--more than two decades of hit books--Peter served as a group editor ushering in new eras for Batman, Green Lantern, and JSA along with special projects like Kingdom Come. Peter also is the author of the creator owned books Light Brigade (Dark Horse) with artist Peter Snejbjerg, The Mighty (Dark Horse) with Keith Champagne and artists Peter Snejbjerg and Chris Samnee, and the critically acclaimed horror/drama series House of Penance (Dark Horse) with artist Ian Bertram. Dan Jurgens is a writer and artist most famous for creating Booster Gold, as well as for being one of the main forces behind "The Death of Superman." He has written and/or illustrated titles such as Justice League America, Captain America, The Sensational Spider-Man, Thor, Teen Titans, Aquaman, and the company-wide DC crossover known as "Zero Hour." Patrick Gleason loves to create fantastic characters and worlds. His focus on character development and powerful storytelling can be seen in DC's Batman and Robin, Green Lantern Corps, Aquaman, JLA, Hawkman, and JSA. His ground-laying work alongside Geoff Johns and Dave Gibbons on the miniseries Green Lantern Corps: Recharge made way for the acclaimed ongoing series. The Sinestro Corps War followed, and then the explosive Blackest Night with Peter J. Tomasi. As part of the DC Comics New 52, Patrick lent his artistic vision to the Dynamic Duo of Batman and Robin. Patrick is currently writing and penciling Robin: Son of Batman. Born in 1963 in the Year of the Rabbit, Doug Mahnke embarked on a love affair with comics at the age of five. He landed a job drawing comics for Dark Horse at the age of 24. Doug and writer John Arcudi collaborated on Dark Horse's The Mask and their creator-owned series Major Bummer, originally published by DC. Since then Doug has worked on a wide variety of titles (including Superman: The Man Of Steel, JLA, Batman, Team Zero, Seven Soldiers: Frankenstein, Black Adam: The Dark Age and Stormwatch: P.H.D.) with such writers as Joe Kelly, Judd Winick, Chuck Dixon, Grant Morrison, Christos Gage and Ed Brubaker, just to name a few. He lives in the midwest with his wife and six kids, one dog, and a bunny named Suzie.