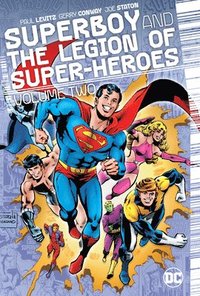 Superboy and the Legion of Super-Heroes Volume 2

av Paul Levitz
Inbunden Engelska, 2018-07-17
379
Köp
Spara som favorit
Skickas inom 5-8 vardagar.
Fri frakt inom Sverige för privatpersoner.
When Clark Kent travels to the 30th century, he meets the greatest peacekeeping force in the galaxy: the Legion of Super-Heroes! In these classic tales written by Paul Levitz, the Legion battles foes including the Fatal Five and the Resource Raiders, faces an invasion of Earth by the savage Khund, and witnesses the return of the wizard known as Mordru. Collects issues #241-258 and DC COMICS PRESENTS #13-14.
Visa hela texten

Bloggat om Superboy and the Legion of Super-Heroes V...

Paul Levitz has worked for DC Comics in various capacities for over 35 years, with tenures as an editor (ADVENTURE COMICS, BATMAN), a writer (ALL STAR COMICS, LEGION OF SUPER-HEROES) and ultimately President and Publisher. As a writer, he is best known for his long association with the Legion, which began in 1974 and has continued off and on ever since with a particularly fan-favored run published between 1982 and 1989. In 2009 Levitz stepped down from his executive role at DC to pursue writing again full-time on series including DOCTOR FATE.