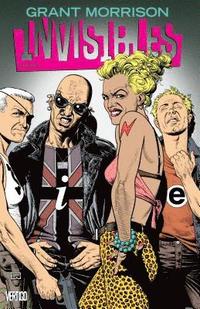 av Grant Morrison
Häftad Engelska, 2018-07-24
259
Köp
Spara som favorit
Skickas inom 7-10 vardagar.
Fri frakt inom Sverige för privatpersoner.
One of Grant Morrison's most controversial, trippiest and abstract comic books ever is back in a recut paperback series! In a world where paranoia is a survival skill, the only hope for humankind is a group of unconventional occultist freedom fighters called the Invisibles. In this collection, the team launches an assault on an underground New Mexico lab to free the cure for the AIDS virus from the alleged inventors of the disease: the U.S. government. Collects THE INVISIBLES VOL. 2 #1-13.
Visa hela texten

Writer Grant Morrison is known for his innovative work on comics from the graphic novel ARKHAM ASYLUM to acclaimed runs on ANIMAL MAN and DOOM PATROL, as well as his subversive creator-owned titles such as THE INVISIBLES, SEAGUY and WE3. Grant has also written best-selling runs on JLA, SEVEN SOLDIERS OF VICTORY and NEW X-MEN and helped to reinvent the DC Universe in THE MULTIVERSITY, ALL STAR SUPERMAN, 52, BATMAN, BATMAN and ROBIN and BATMAN, INC.