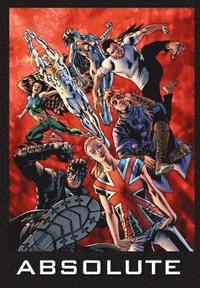 av Warren Ellis, Bryan Hitch
Inbunden Engelska, 2018-07-31
949
Köp
Spara som favorit
Skickas inom 3-6 vardagar.
Fri frakt inom Sverige för privatpersoner.
DC Comics proudly presents a massive slipcased hardcover featuring writer and co-creator Warren Ellis and artist Bryan Hitch's now-classic stories of THE AUTHORITY. This volume includes classic WildStorm imprint characters Apollo, Midnighter, Grifter, Deathblow, Swift, Jack Hawksmoor and more, with the first appearance of the Americans and the G7 Authority! The Authority travel to space! After they obtain the Carrier (a ship capable of moving through the Bleed, the red space which separates alternate universes in the Wildstorm/DC multiverse), but before they can settle in comfortably, a new threat arises. Having tired of the Authority for interfering with Earth's affairs, as well as for reasons of self-interest, the G7 nations (the United States of America, Canada, France, Britain, Japan, Germany and Italy) establish a new Authority, with each member representing one of their respective nations and under their orders. In removing the current Authority, the United States has Seth Cowie incapacitate each member of the Authority, causing the Carrier to crash into Antarctica, allowing the G7 Authority to commandeer the interdimensional vehicle. Will the Authority be able to regain control, or is this new Authority team too powerful? Collects AUTHORITY #13-29, AUTHORITY ANNUAL 2000 #1, WILDSTORM SUMMER SPECIAL #1.
Visa hela texten

"Turns the concept of superheroics on its head in loving, cynical fashion and tells a mean, fast story along the way." -- Publishers Weekly

Warren Ellis is a comics and graphic novel writer best known for the graphic novel series TRANSMETROPOLITAN, THE AUTHORITY and PLANETARY. With over 35 graphic novels in print, Ellis has received numerous accolades, including the International Horror Guild award for graphic narrative and being named one of Entertainment Weekly s 100 Most Creative People. Rolling Stone described his work as more influenced by The Jesus and Mary Chain than by the Justice League, while his characters fight for left-wing agendas over God and country, and kick puppies in the street.