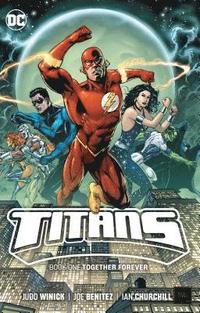 av Judd Winick
Häftad Engelska, 2018-10-02
389
Köp
Spara som favorit
Skickas inom 3-6 vardagar.
Fri frakt inom Sverige för privatpersoner.
A new team of Titans is forged when old friends must reunite to uncover a new mystery that threatens the lives of all Titans past and present! Since the debut of Robin, young heroes across the globe have bonded together under the banner of the Teen Titans! But what happens when the Titans are teens no more? Anyone who has ever been a Titan is being hunted down and killed. Can the one-time Titans team of Nightwing, Beast Boy, Raven, Cyborg, Starfire, Red Arrow, and Donna Troy survive long enough to discover the identity of their mysterious foe? Fan favourite writer Judd Winick begins a new chapter in the lives of the Titans with TITANS BOOK ONE: TITANS TOGETHER, featuring art by Howard Porter and Ian Churchill. Collects TITANS #1-11 and TITANS EAST SPECIAL #1.
Visa hela texten

Writer/artist Judd Winick has handled most every major character in the DC Universe including notable runs on GREEN LANTERN, GREEN ARROW, THE OUTSIDERS, JUSTICE LEAGUE: GENERATION LOST and wrote the critically acclaimed animated feature BATMAN: UNDER THE HOOD, based on his run on BATMAN. Winick came to national attention when appearing on MTV's The Real World: San Francisco, his experienced inspired his memoir, the award-winning Pedro and Me: Friendship, Loss, and What I Learned. His most recent work includes BATWING and CATWOMAN.