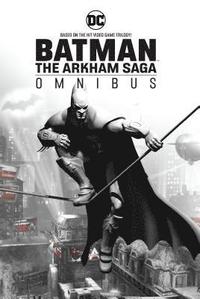 ..".a worthy companion to the game." - IGN "Whether you're a fan of the game or simply looking for a fresh perspective on the ever-growing Batman mythos, this is a book you need on your pull list." - Nerdist

Paul Dini is a multiple Emmy and Eisner award-winning writer and producer who has helped redefine the legends of the DC Universe in such series as The New Batman/Superman Adventures, Batman Beyond, Krypto and Justice League Unlimited. In doing so, he co-created one of the most popular characters in comics in Harley Quinn, who originated as a character in Batman: The Animated Series. In comics he has authored an autobiographical graphic novel Dark Night: A True Batman Story for Vertigo and The World's Greatest Super-Heroes, illustrated by Alex Ross. Dini has also collaborated with Chip Kidd on Batman Animated for HarperCollins.