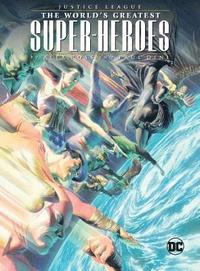 The World's Greatest Superheroes by Alex Ross and Paul Dini

Paul Dini is a multiple Emmy and Eisner Award winning writer and producer who has helped redefine the legends of the DC Universe in such series as THE NEW BATMAN/SUPERMAN ADVENTURES, BATMAN BEYOND, KYRPTO and JUSTICE LEAGUE UNLIMITED. In doing so, he co-created one of the most popular characters in comics in Harley Quinn, who originated as a character in BATMAN: THE ANIMATED SERIES. In comics he has authored THE WORLD S GREATEST SUPER-HEROES, illustrated by Alex Ross. Dini has also collaborated with Chip Kidd on BATMAN ANIMATED for HarperCollins.