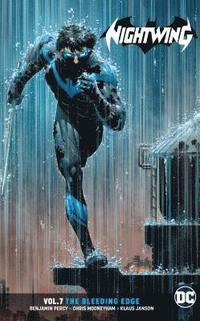 av Benjamin Percy
Häftad Engelska, 2018-12-31
209
Köp
Spara som favorit
Skickas inom 3-6 vardagar.
Fri frakt inom Sverige för privatpersoner.
Change is on the horizon. A new technologist sets his sights on Bludhaven, creating a holographic, interconnected city where everyone is an individual and part of a larger network. It s the internet made physical. Gentrification on gigabyte-laced steroids. But when this new utopia encroaches on his turf, Nightwing starts to uncover a sinister plot based not on revenge but on a reckoning. Incoming creative team of horror novelist and Green Arrow alumn Benjamin Percy and artist Chris Mooneyham (Boom Studios s Planet of the Apes) will take Nightwing on a digital nightmare that will have long-lasting ramifications for the DC Universe in Nightwing Vol. 1! This great new jumping-on point is perfect for readers wanting to catch up with Dick Grayson! Collects #44-48 and Annual #1.
Visa hela texten

"Writer Benjamin Percy is starting not just a new era for the acrobatic member of the Bat Family, he's also spinning a story that will reverberate through many other series in the months ahead." --CBR

Sam Humphries is a comic book writer living in Los Angeles. In 2013, Humphries launched a new Avengers comic called Avengers A.I., and relaunched Uncanny X-Force as part of the blockbuster Marvel Now! initiative. His work for BOOM! Studios includes Higher Earth and Fanboys vs. Zombies. He has also created the critically acclaimed indie hits Our Love is Real and Sacrifice, the latter of which will was re-released in a deluxe hardcover edition by Dark Horse Comics. He is now writing Green Lanterns for DC Comics.