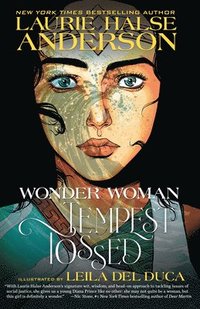 av Laurie Halse Anderson, Leila Del Duca
Häftad Engelska, 2020-06-02
159
Köp
Spara som favorit
Skickas inom 5-8 vardagar.
Gratis frakt inom Sverige över 159 kr för privatpersoner.
Princess Diana believes that her 16th birthday will be one of new beginnings namely acceptance into the warrior tribe of Amazons. The celebrations are cut short, however, when rafts of refugees break through the Themysciran barrier. Diana tries to help them, but she is swept away by the sea and from her home thus becoming a refugee herself. Now Diana must survive in the world outside of Themyscira for the first time; the world that is filled with danger and injustice. She must redefine what it means to belong, to be an Amazon, and to make a difference. Wonder Woman: Tempest Tossed is a story about growing into your strength, battling for justice, and the power of friendship.
Visa hela texten

Laurie Halse Anderson is a New York Times bestselling author known for tackling tough subjects with humour and sensitivity. Two of her books, Speak and Chains, were National Book Award finalists, and Chains was also short-listed for the United Kingdom s Carnegie medal. She was selected by the American Library Association for the Margaret A. Edwards Award for her significant contribution to young adult literature. Laurie has also been honoured for her battles for intellectual freedom by the National Coalition Against Censorship and the National Council of Teachers of English. She is a member of RAINN s National Leadership Council and frequently speaks about sexual violence. Leila del Duca is a comic book creator living in Portland, Oregon. Besides drawing Wonder Woman: Tempest Tossed, she has drawn Sleepless, Shutter, and wrote Afar at Image Comics. Leila has also worked on titles such as The Wicked + The Divine, Scarlet Witch, American Vampire, and The Pantheon Project. During her spare time, she loves to make food, read, dabble in music, and do craft projects, especially during the Portland rainy months. She also loves staring off into space and considers it her favourite past-time.