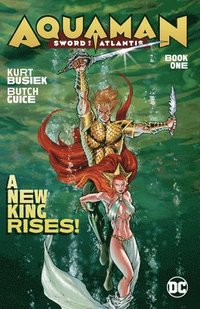 Aquaman: Sword of Atlantis Book One

av Kurt Busiek, Jackson Guice
Häftad Engelska, 2019-12-03
299
Köp
Spara som favorit
Skickas inom 5-8 vardagar.
Gratis frakt inom Sverige över 159 kr för privatpersoner.
It's One Year Later after the events of Infinite Crisis, and Aquaman has totally changed! The new Aquaman begins the hunt for his missing father and fights a savage duel against an Atlantean warrior over his alliance with the much-feared King Shark. Also, the fate of Atlantis is revealed as Aquaman encounters a band of Atlanteans led by Mera! Who is the new saviour of the seven seas, and what happened to the original Aquaman? Collects Aquaman #40-49.
Visa hela texten

Kurt Busiek was born in Boston. He began writing comics professionally in 1982, selling stories to both DC and Marvel Comics in the same month, both of which appeared the same day. Since then, he's written series and characters ranging from Mickey Mouse to Vampirella, including Aquaman, Spider-Man, Conan, Iron Man, the Avengers and more. He is best known for the Marvels series and for his co-creation Astro City, both of which have garnered numerous industry awards. He lives in the Pacific Northwest with his wife, Ann, and his two daughters. He spends far too much time on the Internet.