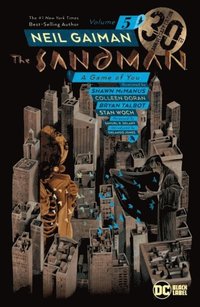 A Game of You

av Neil Gaiman, Shawn McManus
Häftad Engelska, 2019-03-05
169
Köp
Spara som favorit
Skickas inom 5-8 vardagar.
Fri frakt inom Sverige för privatpersoner.
Volume five of New York Times best selling author Neil Gaiman's acclaimed creation The Sandman collects one of the series' most beloved storylines. Take an apartment house, add in a drag queen, a lesbian couple, some talking animals, a talking severed head, a confused heroine and the deadly Cuckoo. Stir vigorously with a hurricane and Morpheus himself and you get this fifth instalment of The Sandman series. This story stars Barbie, who first makes an appearance in The Doll's House and now finds herself a princess in a vivid dreamworld. Collects The Sandman #32-37.
Visa hela texten

"Neil Gaiman is, simply put, a treasure house of story, and we are lucky to have him in any medium." --Stephen King "Among the few comics writers that critics point to as having transcended the genre and created something new and vital." --The San Francisco Examiner "If The Sandman isn't the greatest comic of the century, it is good enough to demand to be judged by those standards." --The Independent

Creator of The Sandman and one of comics' most accomplished writers, Neil Gaiman is also the New York Times best-selling author of the novels Anansi Boys, American Gods, Stardust and Coraline, as well as the short story collections M Is for Magic and Smoke and Mirrors and the multimedia creation Neverwhere. He also co-wrote the Jim Henson Productions film MirrorMask with longtime collaborator Dave McKean, illustrator of the Gaiman-written graphic novels Mr. Punch, Violent Cases and Black Orchid. Among his many awards are the Hugo, the Nebula, the Eisner, the Harvey, the Bram Stoker and the World Fantasy Award. Originally from England, Gaiman now lives in the United States.