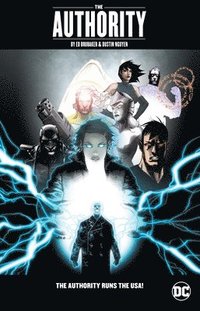 The Authority by Ed Brubaker and Dustin Nguyen

av Ed Brubaker, Dustin Nguyen
Häftad Engelska, 2019-03-26
229
Köp
Spara som favorit
Skickas inom 5-8 vardagar.
Fri frakt inom Sverige för privatpersoner.
Following the dramatic events of COUP D'ETAT, the Authority has settled into its role as governing body of the United States. The other major world powers have adjusted to the regime change and are slowly coming to terms with the meaning it has for the future. But many Americans are unhappy to lose their inalienable rights. Can a second American Revolution be far behind? Six-time Eisner award-winning writer Ed Brubaker and artist Dustin Nguyen bring their unique vision to one of comics' most controversial titles: The Authority! Collects The Authority: Revolution #1-12.
Visa hela texten

Bloggat om The Authority by Ed Brubaker and Dustin N...

Ed Brubaker is one of the most acclaimed writers in comics, winning five best writer Eisner and Harvey Awards in the last ten years. His bestselling work with Sean Phillips On Criminal, Incognito, Fatale, and The Fade Out has been translated around the world to great acclaim, and Marvel's movies featuring his co-creation, The Winter Soldier, have all been international blockbusters. Ed lives in Los Angeles with his wife and their crazy dog, where he works in comics, film, and television, most recently on HBO's new hit series Westworld.