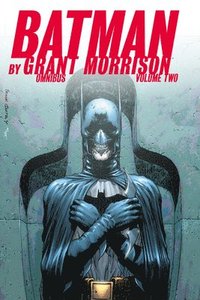 av Grant Morrison, Tony S Daniel
(1 röst)
Inbunden Engelska, 2019-06-25
579
Bevaka
Spara som favorit
Tillfälligt slut – klicka "Bevaka" för att få ett mejl så fort boken går att köpa igen.
Grant Morrison s plunges the Dark Knight into his wildest adventure yet. Batman has proven he can win no matter the odds, but what happens when his opponent is death itself? The Dark Knight has fallen, sacrificing himself in the Final Crisis to defeat the ultimate evil. Tim Drake has laid down the mantle of Robin to search the world for a sign that his mentor can be brought back from oblivion. Now collecting the entirety of this epic saga, this second of three omnibus collections introduces Batman to his son, Damian Wayne, and takes the Caped Crusader from the brink of death to the edge of madness. These blockbuster stories, including the now-classic Batman and Son, Batman: The Black Glove and Batman R.I.P., feature a deconstruction of superhero comics like no other, with a challenging, thought-provoking take on the man behind the cowl. This edition also includes the milestone 700th issue of Batman, featuring stories spotlighting each of the Batmen from different eras, with art from Andy Kubert, Tony Daniel and Frank Quitely. Collects Batman #700-702, Batman and Robin #1-16 and Batman: The Return of Bruce Wayne #1-6.
Visa hela texten

"[A] sweeping, emotionally draining saga." -Publishers Weekly "Game-changing redefining of the Caped Crusader." -Entertainment Weekly "A wildly entertaining ride that's been at all times challenging, unsettling, amusing, inventive, iconic and epic... one of the most exciting eras in Batman history." -IGN "Terrifically exciting." -Variety "Grant Morrison's Batman saga is the ultimate superhero mosaic... Brilliant, intricately crafted, re-inventive and insanely addictive." -IGN "When Morrison is on, there's not really anyone better... and he's certainly been on in [Batman: The Return of Bruce Wayne]." -MTV Geek "One of the greatest Batman tales ever told." -CraveOnline "One of the Top 10 moments in Batman's history." -io9

Writer Grant Morrison is known for his innovative work on comics from the graphic novel Batman: Arkham Asylum to acclaimed runs on Animal Man and Doom Patrol, as well as his subversive creator-owned titles such as The Invisibles, Seaguy and WE3. Grant has also written best-selling runs on JLA, Seven Soldiers of Victory and New X-Men and helped to reinvent the DC Universe in The Multiversity, All-Star Superman, 52, Batman, Batman and Robin and Batman, Incorporated.