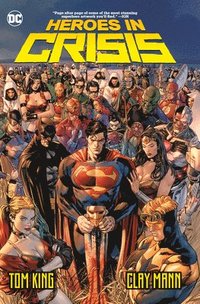 av Tom King, Clay Mann
Inbunden Engelska, 2019-10-01
269
Köp
Spara som favorit
Finns även som
Visa alla 1 format & utgåvor
Welcome to Sanctuary, an ultra-secret hospital for superheroes who've been traumatized by crime-fighting and cosmic combat. But something goes inexplicably wrong when many patients wind up dead, with two well-known operators as the prime suspects: Harley Quinn and Booster Gold! It's up to the DC Trinity of Superman, Wonder Woman and Batman to investigate--but can they get the job done in the face of overwhelming opposition? Superstar comics writer and former CIA operative, Tom King (Batman, Mister Miracle) examines the potential long-lasting effects of saving the world in this groundbreaking new graphic novel with jaw-dropping art from the team of Clay Mann and Lee Weeks! Collects Heroes in Crisis #1-9
Visa hela texten

"Heroes in Crisis is a fresh look at the normalization of hypermasculinity, which leaves no room for emotional vulnerability." -Newsweek "Dives into the far-reaching effects of post-traumatic stress disorder, all through the lens of a superhero comic." -Inverse "The nuanced look at characters both iconic and obscure adds an even greater sense of richness to this story." -IGN "Hooked us in from the first few pages." -Nerdist "Treats death like what it is-tragedy." -Polygon "Mythological and grandiose." -io9 "It's a gut punch for readers and Wally's fellow heroes alike." -SyFy Wire "Clay Mann's art and Tomeu Morey's colors are enthralling, and the warm, September afternoon feeling of the book only adds to the overall sense of dread." -Den of Geek "Absolutely compelling." -Black Nerd Problems "Writer Tom King weaves a tense whodunnit into a sometimes controversial plotline that examines the psychological turmoil beneath the costume, from PTSD to addiction." -The Ringer "An underlying story about emotional pain and trauma among superheroes...a story of heroic, larger than life characters who must also deal with the very real fallout of post-traumatic stress disorder in the wake of the brutal circumstances surrounding their adventures." -Publishers Weekly

Tom King is a comic book writer and novelist, best known for his work at DC Comics including Batman, Mister Miracle, Grayson and Omega Men. He often relies on his experience as an ex-CIA agent and experiences during the recent conflicts in the Middle East in his writing, especially apparent in Grayson (alongside co-writer Tim Seeley) and Omega Men and in The Sheriff of Babylon, published under the Vertigo imprint.