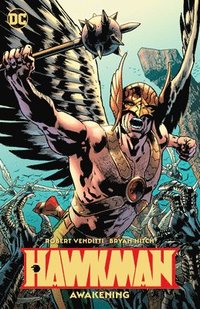 av Robert Venditti, Bryan Hitch
Häftad Engelska, 2019-06-18
189
Köp
Spara som favorit
Skickas inom 5-8 vardagar.
Fri frakt inom Sverige för privatpersoner.
Spinning out of the events of Dark Nights: Metal, Carter Hall returns to the DC Universe! An explorer of the ancient and unknown, Hawkman finds himself embroiled in a long-standing mission to discover the true purpose of his many reincarnations. Carter will race around the globe trying to piece together an ancient prophecy, but will he be able to face down his own past lives lurking around every corner? Fan favourite writer Robert Venditti (Hal Jordan and the Green Lantern Corps, The Flash) is joined by industry superstar Bryan Hitch (Justice League, The Ultimates) to redefine DC's winged wonder for a new era! Collects Hawkman #1-6.
Visa hela texten

"An accessible, even movie-ready version of the character." --Den of Geek "A wonderful comic that demands to be read, re-read, and shared." --Comicosity

Robert Venditti is the New York Times best-selling author of The Homeland Directive and the sci-fi graphic novel series The Surrogates, the first instalment of which was adapted into a feature film starring Bruce Willis and Ving Rhames. He also writes the graphic novel adaptations of Rick Riordan's bestselling Percy Jackson and the Olympians novels. His most recent projects include X-O Manowar, Hal Jordan and the Green Lantern Corps. and The Flash. Kevin Maurer is the author of several books, including No Easy Day: The First-hand Account of the Mission That Killed Osama Bin Laden. No Easy Day spent several weeks at #1 on the New York Times best seller list, and it was the top-selling hardcover book in the industry in 2012. The book is being translated in more than a dozen countries and also debuted at #1 in the U.K. and Canada. Maurer has covered the military for more than ten years. In 2003, he followed the 82nd Airborne Division during the initial invasion of Iraq. He returned to cover the soldiers more than a dozen times, most recently in 2010 where he spent ten weeks with a Special Forces team in Afghanistan. He has also embedded with American soldiers in east Africa and Haiti.