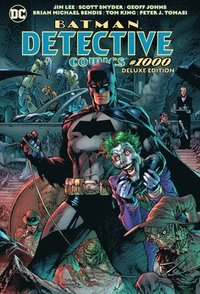 "A powerful story." -SYFY Wire "One of the superstar pairings for the Detective Comics anniversary is the reunion of writer Brian Michael Bendis and artist Alex Maleev." -Entertainment Weekly

Working on such titles as Green Lantern, the Batman titles, Aquaman and Hawkman, Peter Tomasi was an occasional writer (and editor for DC) on various titles including JSA, The Outsiders, Steel and The Light Brigade. In 2007, Tomasi left his 15 year role as an editor and transitioned to one of writer. He began on the limited series Black Adam: The Dark Age, and he is currently the regular writer on the relaunch of Batman: Detective Comics. He has also written the Final Crisis tie-in Requiem, a tribute to the Martian Manhunter.