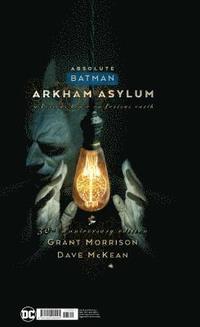 av Grant Morrison, Dave McKean
Inbunden Engelska, 2019-09-17
559
Köp
Spara som favorit
Skickas inom 5-8 vardagar.
Fri frakt inom Sverige för privatpersoner.
The inmates of Arkham Asylum have taken over Gotham's detention centre for the criminally insane on April Fool's Day, demanding Batman in exchange for their hostages. Accepting their demented challenge, Batman is forced to endure the personal hells of the Joker, Scarecrow, Poison Ivy, Two-Face and many other sworn enemies in order to save the innocents and retake the prison. During his run through this absurd gauntlet, the Dark Knight's must face down both his most dangerous foes and his inner demons. Absolute Batman: Arkham Asylum (30th Anniversary Edition) presents the psychological masterpiece written by legendary writer Grant Morrison with nightmare with art from all-time great Dave McKean in a slipcased hardcover edition.
Visa hela texten

Writer Grant Morrison is known for his innovative work on comics from the graphic novel Batman: Arkham Asylum to acclaimed runs on Animal Man and Doom Patrol, as well as his subversive creator-owned titles such as The Invisibles, Seaguy and WE3. Grant has written best-selling runs on JLA, Seven Soldiers of Victory and New X-Men and helped to reinvent the DC Universe in The Multiversity, All Star Superman, 52, Batman, Batman and Robin and Batman Incorporated. More Recently Grant has had his creator owned series Happy! turned into a TV series on the SYFY network. He also made his return to monthly comics in 2018 with The Green Lantern.