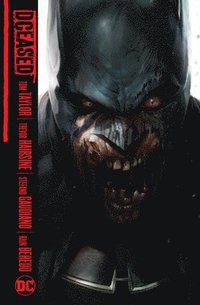 av Tom Taylor
(1 röst)
Inbunden Engelska, 2019-11-26
269
Köp
Spara som favorit
Skickas inom 5-8 vardagar.
Fri frakt inom Sverige för privatpersoner.
It's the end of the world as we know it! Six hundred million people worldwide are instantly turned into violent, monstrous engines of destruction when their minds are recoded with a corrupted Anti-Life Equation from Apokolips. The heroes of Earth are fighting a losing battle to save humanity, save the world and save themselves, in one of the most shocking tales ever told in the DC Universe. Fighting time, each other and all of humanity, Earth's greatest heroes must rally together for what may very well be their last chance to save the world from the most terrible plague humanity has ever seen. The Anti-Life Equation has been released and is ravaging the world at the viral speed of social media. Once exposed, victims lose their minds, violently attacking all around them. The heroes of Earth are fighting a losing battle to save the world...and themselves! With time running out, who will live and who will die in this apocalyptic tale of heroism, sacrifice and annihilation? Collects issues #1-6.
Visa hela texten

Tom Taylor is the creator of the Aurealis Award-winning graphic novel series The Deep (which tells the adventures of a multi-ethnic family of underwater explorers who live on a submarine). The Deep has been optioned by Technicolor to be turned into a 26-episode CG animated series. He is perhaps best known for the best-selling DC Comics series Injustice: Gods Among Us, Earth 2, Batman/Superman and his many Star Wars series. Taylor has written for DC Comics, Dark Horse Comics, IDW Publishing, WildStorm, 2000 AD and Gestalt Comics. Trevor Hairsine is a British artist who got his start working for the Judge Dredd Megazine before continuing his career with Marvel Comics.