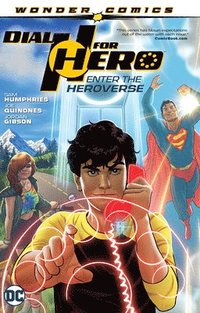 av Sam Humphries
Häftad Engelska, 2019-12-23
149
Köp
Spara som favorit
Skickas inom 7-10 vardagar.
Fri frakt inom Sverige över 159 kr för privatpersoner.
Teenage Miguel Montez discovers the long-lost H-Dial, an ancient and unbelievably powerful rotary phone that gives its users (seemingly) random superpowers for one hour. With evil factions desperate to get their hands on its power, Miguel steals the only mode of transport he can -- his uncle's food truck! Join Miguel as he hightails it across the country to give the H-Dial to the one man who can keep it safe: Superman! Aimed at providing readers with honest and innovative reading experiences, Brian Michael Bendis' Wonder Comics is a celebration of the moments of in life when discoveries are made -- when purpose and meaning are revealed and destinies are defined. Featuring the young heroes of the DC Universe as penned by all-star creative teams in exciting new adventures that will celebrate the wonders of life, love and comics. Collects Dial H for Hero #1-6
Visa hela texten

"Sam Humphries is better than anyone in the business at fusing the absurd and the human." --GeekDad

Sam Humphries is a comic book writer living in Los Angeles. In 2013 Humphries launched a new Avengers comic called Avengers A.I., and relaunched Uncanny X-Force as part of the blockbuster Marvel Now! initiative. His work for Boom! Studios includes Higher Earth and Fanboys vs. Zombies. He has also created the critically acclaimed indie hits Our Love Is Real and Sacrifice, the latter of which was rereleased in a deluxe hardcover edition by Dark Horse Comics. His recent works include Green Lanterns and Nightwing for DC Comics.