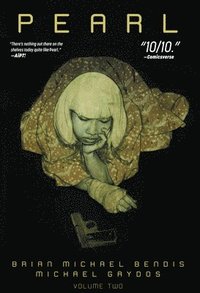 av Brian Michael Bendis, Michael Gaydos
Häftad Engelska, 2019-12-17
149
Köp
Spara som favorit
Skickas inom 7-10 vardagar.
Fri frakt inom Sverige över 159 kr för privatpersoner.
Meet Pearl, a talented tattoo artist for elite members of the Yakuza in San Francisco. Following the tragedy of her mother's death, Pearl tattooed her albino skin with an elaborate full-body tattoo you can see only when she is flushed with excitement--or rage. Now Pearl has learned the truth behind her family, her clan and her upbringing, all of which sends her heading to Tokyo to face her legacy head-on! The Award-winning creative team of writer Brian Michael Bendis (Superman, Jessica Jones, Spider-Man: Miles Morales) and artist Michael Gaydos (Jessica Jones) turn up the heat as they continue story of one of 2018's best new characters! Collects Pearl # 7-12.
Visa hela texten

Brian Michael Bendis is an award-winning comics creator, New York Times bestseller and one of the most successful writers working in mainstream comics. In his 20 years at Marvel Comics, he produced some of the greatest graphic novels the publisher has ever seen and created popular characters Jessica Jones and Spider Man: Miles Morales. He is also known for his contributions to the crime/noir genre with creator-owned works for his Jinxworld imprint. In 2018 Brian moved to DC Comics where he made his DC debut in the landmark Action Comics #1000. He currently writes Superman and Action comics as well as 4 new original series under the Jinxworld banner and is also curating a custom line of comics called Wonder Comics focusing on young heroes as the protagonists. He currently lives in Portland, Oregon with his family.