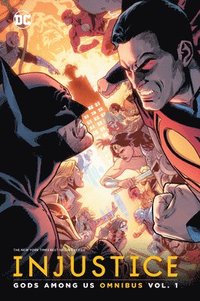 Injustice: Gods Among Us Omnibus Volume 1

av Tom Taylor
Inbunden Engelska, 2019-12-10
1319
Köp
Spara som favorit
Skickas inom 5-8 vardagar.
Fri frakt inom Sverige för privatpersoner.
Superman is Earth s greatest hero. But when the Man of Steel can t protect the thing he holds most dear, he decides to stop trying to save the world-and start ruling it. Things in the DC Universe have changed after Superman is tricked into destroying the one thing he loves the most. Now unwilling to let crime go unpunished, the heroes of our world must choose if they are with Superman or against him. But not every country will submit to his new world order and neither will Superman s greatest threat-Batman! And the Dark Knight will use any method at his disposal to stop his former friend from reshaping the world in his shattered image. Injustice Gods Among Us Omnibus Vol. 1 collects the earth-shattering first three years of the massively popular series written by fan favourite author Tom Taylor (Injustice, Friendly Neighborhood Spider-Man) and with art by rising stars Mike S. Miller and Bruno Redondo! Collects Injustice: Gods Among Us #1-12 + Annual #1, Injustice: Gods Among Us: Year Two #1-12 + Annual #1 and Injustice: Gods Among Us: Year Three #1-12 + Annual #1.
Visa hela texten

Tom Taylor is the creator of the Aurealis Award-winning graphic novel series The Deep (which tells the adventures of a multi-ethnic family of underwater explorers who live on a submarine). The Deep has been optioned by Technicolor to be turned into a 26-episode CG animated series. He is perhaps best known for the best-selling DC Comics series Injustice: Gods Among Us, Earth 2, Batman/Superman and his many Star Wars series. Taylor has written for DC Comics, Dark Horse Comics, IDW Publishing, WildStorm, 2000 AD and Gestalt Comics.