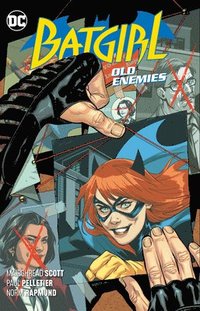 av Mairghread Scott, Paul Pelletier
Häftad Engelska, 2019-12-24
199
Köp
Spara som favorit
Skickas inom 3-6 vardagar.
Fri frakt inom Sverige för privatpersoner.
It's Batgirl for Congress! Plus, masked assassins and awkward exes! Barbara Gordon volunteers to campaign for an up-and-coming reformer candidate who wants to take on the GCPD. That puts Barbara in a tough spot against her father--police commissioner James Gordon. And just when things couldn't get any more awkward, a former flame re-enters Barbara's life. Personal angst and a masked super-villain hunting a mystery target. It's gonna be a long day, Babs. From writer Mairghread Scott, it's a new journey for Batgirl as she balances vigilante life with a political campaign in Batgirl Vol. 6. Collects #30-36.
Visa hela texten

Mairghread Scott is an animation and comic book writer specializing in action-comedy. She excels at projects that involve heavy continuity, re-branding and breaking stories in a writers' room. Her work can be seen in the examples below as well as the upcoming season of Marvel's Guardians of the Galaxy and the new Marvel Rising: Secret Warriors feature-length animated movie and animated shorts, as well as the comic books Marvel Universe: Guardians of the Galaxy, Transformers: Till All Are One, Science Comics: Robots and Drones, The City on the Other Side and her creator-owned series Toil and Trouble. Her most recent works include a Green Arrow story and Batgirl for DC Comics.