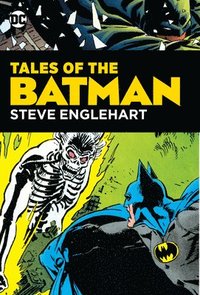 Tales of the Batman: Steve Englehart

av Steve Englehart
Inbunden Engelska, 2020-01-07
359
Köp
Spara som favorit
Skickas inom 5-8 vardagar.
Gratis frakt inom Sverige över 159 kr för privatpersoner.
In 1977 comics writer Steve Englehart left Marvel Comics following acclaimed runs on titles like The Avengers, Captain America and Doctor Strange, and came to DC to write the adventures of Batman in the pages of Detective Comics. Together with rising-star artist Marshall Rogers, Englehart crafted a dark, moody run of stories in which Batman faces his own lonely existence while struggling against one of his earliest foes, Dr. Hugo Strange. This run also includes the renowned "Joker Fish" storyline in which the Clown Prince of Crime comes up with his most off-the-wall scheme ever, along with a 2006 miniseries in which The Joker runs for office with the slogan "Vote for me or I'll kill you!" This volume collects Detective Comics #469-476, #478 and #479, and Batman- Dark Detective #1-6.
Visa hela texten

Steve Englehart is best known for writing for such comics series as Captain America, Doctor Strange and the Avengers for Marvel Comics, and Detective Comics and the Justice League of America for DC, as well as for his novels The Point Man, The Long Man and The Plain Man. He has been named Favorite Writer at the Eagle Awards, and has also won an Inkpot Award for his comics work. He is currently working on a new Max August novel.