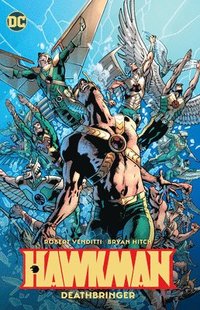 av Robert Venditti, Bryan Hitch
Häftad Engelska, 2019-12-10
149
Köp
Spara som favorit
Skickas inom 7-10 vardagar.
Fri frakt inom Sverige över 159 kr för privatpersoner.
Rocketing across the cosmos in his newly re-covered spaceship, Carter Hall is en route to the next stop on his adventure through time and space. He doesn't have Netflix to pass the time, but he does have something even better. Locked within the ship's memory banks is the truth behind Carter Hall's reincarnation ability, as well as his connection to the Deathbringers--giant, winged beings of immeasurable power on their way to destroy Earth! Fan favourite writer Robert Venditti (Hal Jordan and The Green Lantern Corps, The Flash) and legendary artist Bryan Hitch (The Ultimates, Justice League) continue their reinvention on DC's winged wonder, Hawkman! As Carter Hall continues to uncover the clues of his past lives, he will find that they may also spell the end of his current one! Collects Hawkman #7-12.
Visa hela texten

Robert Venditti is the New York Times best-selling author of The Homeland Directive and the sci-fi graphic novel series The Surrogates, the first instalment of which was adapted into a feature film starring Bruce Willis and Ving Rhames. He also writes the graphic novel adaptations of Rick Riordan's bestselling Percy Jackson and the Olympians novels. His most recent projects include X-O Manowar, Hal Jordan and the Green Lantern Corps. and The Flash.