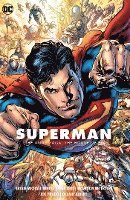 The House of El

av Brian Michael Bendis, Ivan Reis
Häftad Engelska, 2020-03-24
179
Köp
Spara som favorit
Skickas inom 7-10 vardagar.
Fri frakt inom Sverige för privatpersoner.
Finns även som
Visa alla 1 format & utgåvor
The epic secrets of Superman continue to unfold! A few months in space with his paternal grandfather Jor-El changed Jon Kent forever. With Jon now seeking help from his father, the Man of Steel must learn about the war his son and father fought together and set right the wrongs his father may have unleashed on other worlds. See what changed Superboy in such radical ways as the Unity Saga continues! Brian Michael Bendis and Ivan Reis continue to astonish in what many are calling the best Superman story ever! Questions will be answered and destinies will be forged, all in Superman Vol. 2: The Unity Saga: The House of El!
Visa hela texten

Brian Michael Bendis is an award-winning comics creator, New York Times bestseller and one of the most successful writers working in mainstream comics. In his 20 years at Marvel Comics, he produced some of the greatest graphic novels the publisher has ever seen and created popular characters Jessica Jones and Miles Morales.He is also known for his contributions to the crime/noir genre with creator-owned works for his Jinxworld imprint. In 2018 Brian moved to DC Comics, where he made his DC debut in the landmark Action Comics #1000. He currently writes Superman and Action Comics as well as four new original series under the Jinxworld banner and is also curating a custom line of comics called Wonder Comics focusing on young heroes as the protagonists. He currently lives in Portland, Oregon, with his family.