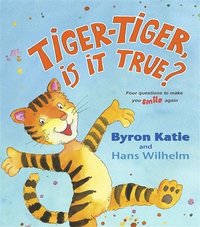 av Byron Katie, Hans Wilhelm
Inbunden Engelska, 2009-11-02
169
Köp
Spara som favorit
Skickas inom 3-6 vardagar.
Fri frakt inom Sverige för privatpersoner.
Tiger-Tiger, Is It True? is a story about a little tiger who thinks that his whole world is falling apart: his parents don't love him, his friends have abandoned him, and life is unfair. But a wise turtle asks him four questions, and everything changes. He realizes that all his problems are not caused by things, but by his thoughts about things; and that when he questions his thoughts, life becomes wonderful again. This is a heart-warming story with a powerful message that can transform the lives of even very young children. Byron Katie's wisdom-filled words and Hans Wilhelm's vivid, magical illustrations combine to make a book that will become one of the classics of children's literature.
Visa hela texten

A heart-warming story from world-renowned self-help author. The Green Parent

Bloggat om Tiger-Tiger, Is It True?

Byron Katie's simple yet powerful method of inquiry into the cause of all suffering is called The Work. Since 1986, she has introduced The Work to millions of people throughout the world. Her bestselling books have been translated into 29 languages. Hans Wilhelm's 200 books have been translated into 20 languages and have become successful animated television series that are enjoyed by children all over the world. His books have won numerous international awards and prizes.