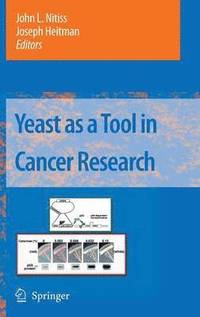 Yeast as a Tool in Cancer Research

av John L Nitiss, Joseph Heitman
Inbunden Engelska, 2007-05-01
3079
Köp
Spara som favorit
Skickas inom 5-8 vardagar.
Fri frakt inom Sverige för privatpersoner.
Finns även som
Visa alla 2 format & utgåvor
Leland H. Hartwell Director, Fred Hutchinson Cancer Research Center, Nobel Laureate for Medicine, 2001 Yeast has proved to be the most useful single-celled organism for studying the fundamental aspects of cell biology. Resources are now available for yeast that greatly simplify and empower new investigations, like the presence of strains with each gene deleted, each protein tagged and databases on protein-protein interactions, gene regulation, and subcellular protein location. A powerful combination of genetics, cell biology, and biochemistry employed by thousands of yeast researchers has unraveled the complexities of numerous cellular processes from mitosis to secretion and even uncovered new insights into prion diseases and the role of prions in normal biology. These insights have proven, time and again, to foretell the roles of proteins and pathways in human cells. The collection of articles in this volume explores the use of yeast in pathway analysis and drug discovery. Yeast has, of course, supplied mankind's most ubiquitous drug for thousands of years. In one aspect, the role of yeast in drug discovery is much like the role of yeast in other areas of biology. Yeast offers the power of genetics and a repetoire of resources available in no other organism. Using yeast in the study of drug targets and metabolism can help to make a science of what has been largely an empirical activity. A science of drug discovery would permit rigorous answers to important questions.
Visa hela texten

Bloggat om Yeast as a Tool in Cancer Research