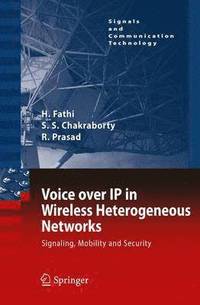 av Hanane Fathi, Shyam Chakraborty, Ramjee Prasad
Inbunden Engelska, 2008-10-14
1849
Köp
Spara som favorit
Skickas inom 5-8 vardagar.
Fri frakt inom Sverige för privatpersoner.
Finns även som
Visa alla 2 format & utgåvor
karmano hy api boddhavyam boddhavyam ca vikarmanah akarmanas ca boddhavyam gahana karmano gatih The intricacies of action are very hard to understand. Therefore one should know properly what action is, what forbidden action is, and what inaction is. The Bhagvad Gita (4.17) This book is the outcome of the research contribution of Hanane Fathi towards her Ph.D. studies jointly with Shyam S. Chakraborty and Ramjee Prasad as - pervisors. To the best of the authors' knowledge, this is a ?rst book on voice over Internet protocol (VoIP) covering such a broad perspective as illustrated in Figure P.1. This book is a new, forward-looking resource that explores the present and future trends of VoIP in the wireless heterogeneous networks. This book also provides the discovery path that these network infrastructures are following from a perspective of synergies with the present systems and how they will pave the way for future systems. This book is intended for everyone in the ?eld of wireless information and multimedia communications. It provides different levels of material suitable for managers, researchers, network providers, and graduate students. We hope that all readers will experience the bene?ts and power of this knowledge. We have tried our best to make each chapter comprehensive and we cannot claim that this book is without errors. Any remarks to improve the text and correct the errors would be highly appreciated.
Visa hela texten

Hanane Fathi received her M.S. in Electrical Engineering and her Ph.D. in Wireless Communications Engineering from Aalborg University, Denmark, in 2002 and 2006 respectively. She also holds a M. S. in Information Technology from Ecole Centrale d'Electronique, Paris, France. She visited Imai laboratory at the University of Tokyo, Japan, from October 2004 to March 2005. From 2006 to 2008, she worked as a research scientist at the Research Center for Information Security (RCIS) at the National Institute of Advanced Industrial Science and Technology (AIST), Japan. Currently, she is a assistant research Professor at Aalborg University, Denmark. Her research interests include network security, wireless communications security, anonymous communication, privacy and network coding. Shyam Chakraborty is Reader in wireless technology at University of Ulster and located at the Magee Campus. He received his M. Tech. from IIT Delhi and Licenciate and Doctor of Technology degrees from Helsinki University of Technology. He was the recipient of Academy Research Fellowship of academy of Finland (2000-2004). He was also with Ericsson Corporate Research (2005-2007). His research interests are architecture of IP based wireless networks; modelling and analysis of protocols; reliable and secure communications; VoIP and IMS over wireless systems etc. Prof. Ramjee Prasad is editor-in-chief of the Wireless Personal Communications journal and he has published over 20 academic books in the field of Wireless Communications. He was series advisor with Artech House though now publishes his books for Springer and also Wiley.