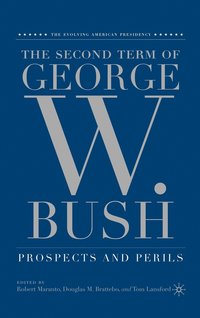 "From White House veteran Bradley Patterson, to well-established political scientists, to young up-and-coming presidency scholars, the editors have put together an insightful set of perspectives on the Bush Presidency. If you want a guide to President Bush's second term, this is it." - James P. Pfiffner, George Mason University and author of The Strategic Presidency, and The Character Factor "Timely, illuminating, and perceptive essays. Prominent scholars dig deep to explore the likely prospects for Bush in his remaining years in office." - Louis Fisher, author of Presidential War Power "This is a comprehensive analysis concerning the institutional, leadership and policy objectives of an administration determined to operate both inside and outside a beltway-driven conservative political culture. This lucid account is a 'must read' for scholars, policy makers and students of Bush's legacy as a two-term president of a polarized country, with the additional dimension of confronting the fallout of an increasingly unpopular war in Iraq." - John Davis, Howard University"This collection of scholarship is timely and much-needed. It is a well-written, well-researched, and worthwhile addition to the scholarly literature on the presidency in general and on George W. Bush in particular. I believe this text is well-suited to advanced undergraduates as well as graduate students." - Denise von Herrmann, University of Southern Mississippi "This book lays to bare key questions and issues that plague all second term presidents and provides a powerful lens to understand the context, constraints and capacities which presidents must confront. This book will appeal to an advanced undergraduate audience and find a home in political science and history courses on the presidency." - Victoria A. Farrar-Myers, The University of Texas at Arlington