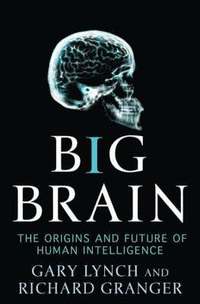 The Origins and Future of Human Intelligence

av Gary Lynch, Richard Granger
Inbunden Engelska, 2008-04-01
439
Bevaka
Spara som favorit
Tillfälligt slut – klicka "Bevaka" för att få ett mejl så fort boken går att köpa igen.
Finns även som
Visa alla 2 format & utgåvor
Our big brains, our language ability, and our intelligence make us uniquely human. But barely 10,000 years ago - a mere blip in evolutionary time - human-like creatures called "Boskops" flourished in South Africa. They possessed extraordinary features: forebrains roughly 50% larger than ours, and estimated IQs to match - far surpassing our own. Many of these huge fossil skulls have been discovered over the last century, but most of us have never heard of this scientific marvel. Prominent neuroscientists Gary Lynch and Richard Granger compare the contents of the Boskop brain and our own brains today, and arrive at startling conclusions about our intelligence and creativity. Connecting cutting-edge theories of genetics, evolution, language, memory, learning, and intelligence, Lynch and Granger show the implications of large brains on a broad array of fields, from the current state of the art in Alzheimer's and other brain disorders, to new advances in brain-based robots that see and converse with us, and the means by which neural prosthetics - replacement parts for the brain - are being designed and tested. The authors demystify the complexities of our brains in this fascinating and accessible book, and give us tantalizing insights into our humanity - its past, and its future.
Visa hela texten

CHOICE Outstanding Academic Title for 2009 'On a planet in which everything seems to be getting bigger (the internet), hotter (our climate) or more numerous (the world's population), Gary Lynch and Rick Granger reveal the intriguing possibility that people with larger brains than us may have been around a few thousand years ago. Their account of the mysteries of the brain and intelligence challenges conventional views in a scholarly yet wonderfully accessible manner.' - Prof. Richard Morris, Director, Centre for Cognitive and Neural Systems, University of Edinburgh, UK, President, Federation of European Neuroscience Societies, Former chair, Brain Research Association of the United Kingdom 'The Lynch and Grainger combination is like mixing gas with fire. In this book there are big, explosive ideas by two ingenious brain scientists.' - Michael Gazzaniga, author of The Ethical Brain 'The brain makes all our hopes, dreams, and fears possible. How did it come to be this way? Look no further than this book. This fascinating and provocative account of the human brain's recent past reminds us that the thing that makes us who we are is a continuously changing organ, and begs the question of where our species is headed next.' -- Joseph LeDoux, author of The Emotional Brain 'I've been waiting for someone to write this book for years. I almost wrote it myself -- twice -- but was distracted by other projects. Now Gary Lynch and Richard Granger have written a much-needed book on big brains.' William H. Calvin, University of Washington writing in New Scientist 'In this richly illustrated book Lynch and Granger compare the modern brain with that of the Boskop and come to some startling conclusions. Among other things they speculate on how mind power is governed by the size of the brain.' - Good Book Guide '...a riveting account of how the human brain evolved.' - Nicole Branan, Scientific American Mind

GARY LYNCH is a professor at the University of California, Irvine, USA. He is the author of more than 550 scientific publications that are among the most cited in the field of neuroscience. He is the co-inventor of a novel family of cognition-enhancing drugs called _ampakines_. He has been featured in major television networks, newspapers, and magazines ranging from the Los Angeles Times to Popular Science. RICHARD GRANGER is W.H. Neukom Distinguished Professor of Computational Science and of Psychological and Brain Sciences at Dartmouth, USA. He has been the principal architect of a series of advanced computational systems for military, commercial and medical applications, and co-inventor of FDA-approved devices and drugs. His work has been highlighted in numerous popular press and television features, including recent stories in Forbes, Wired, and on CNN.