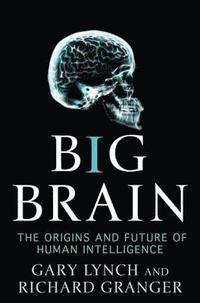 The Origins and Future of Human Intelligence

av Gary Lynch, Richard Granger
Häftad Engelska, 2009-01-19
349
Köp
Spara som favorit
Specialorder (osäker tillgång). Skickas inom 11-20 vardagar.
Fri frakt inom Sverige för privatpersoner.
Finns även som
Visa alla 2 format & utgåvor
This title provides a radical and cutting-edge consideration of the past, present and future of brain engineering. Rave reviews for the hardcover have appeared in "Discover", "New Scientist" and "The Boston Globe"; February Interview on 'Gene Expression' an online Science blog; and, Interview with Richard Granger in April issue of "Ability Magazine". Granger has been featured in "Forbes" and "Wired", and both have appeared on CNN. Lynch and Granger include illustrations of the more complex theories about the brain. The authors are forerunning scholars in the future of brain engineering, memory enhancement and the study of human intelligence. In this groundbreaking look at the evolution of our brains, eminent neuroscientists Gary Lynch and Richard Granger weave together history, science and the latest theories of artificial intelligence to demystify the complexities, showing how memory, cognition and intelligence function and which mechanisms can potentially be enhanced.
Visa hela texten

"An excellent book...very well written and informative." --CHOICE "[A] fascinating and provocative account of the human brain's recent past."--Joseph LeDoux, author of "The Emotional Brain"<p>"A much needed book on big brains... Big Brain is a popular account of how brains enlarge, in both evolutionary and developmental terms. The strength of the book lies in the neuroscience, especially its treatment of neural plasticity and the "association areas" of the brain... "--William H Calvin, "New Scientist"<p>"The Lynch and Granger combination is like mixing gas with fire. In this book there are big, explosive ideas by two ingenious brain scientists."--Michael Gazzaniga, author of "The Ethical Brain"<p>"On a planet in which everything seems to be getting bigger (the internet), hotter (our climate), or more numerous (the world's population), Gary Lynch and Rick Granger reveal the intriguing possibility that people with larger brains than us may have been around a few thousand years ago. Their account of the mysteries of the brain and intelligence challenges conventional views in a scholarly yet wonderfully accessible manner."--Richard Morris, Director of the Centre for Cognitive and Neural Systems, University of Edinburgh, and President, Federation of European Neuroscience Societies, and Former Chair, Brain Research Association of the United Kingdom<p>"Riveting...the book tracks the evolutionary development of the human brain..." -Anthony Doerr, ""Boston Globe""

GARY LYNCH is a professor at the University of California, Irvine, USA. He is the author of more than 550 scientific publications that are among the most cited in the field of neuroscience. He is the co-inventor of a novel family of cognition-enhancing drugs called ampakines. He has been featured in major television networks, newspapers, and magazines ranging from the Los Angeles Times to Popular Science. RICHARD GRANGER is W.H. Neukom Distinguished Professor of Computational Science and of Psychological and Brain Sciences at Dartmouth, USA. He has been the principal architect of a series of advanced computational systems for military, commercial and medical applications, and co-inventor of FDA-approved devices and drugs. His work has been highlighted in numerous popular press and television features, including recent stories in Forbes, Wired, and on CNN.

Two Strategies for Internalizing the World; Genes and Evolution; Brains Arrive; Olfaction (Sense of Smell) Designs a Network; From Olfaction to Cognition; The Thinking Brain; Tools for Thinking; Individual Differences; A Short History of the Humans; The Origins of Intelligence; Giant Brains; Extrapolations; More than Human.