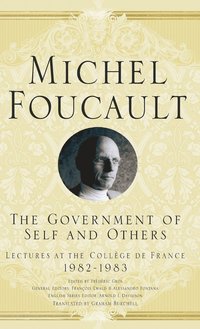 The Government of Self and Others

"The publications of Foucault's lectures at the College de France have given us an incredible view of the development of his thinking. This new volume, The Government of Self and Others, shows us how Foucault was conceiving the relation between the self and the others who make up the political, how fearless speech (parr?sia) is at the center of both, and how parr?sia defines, for Foucault, philosophical action itself. Thanks to these lectures, we see Foucault as the great thinker he is." - Leonard Lawlor, Sparks Professor of Philosophy, Penn State University, USA. "The publication of Foucault's lectures is momentous not only because they deepen our understanding of his books and essays, but because they dramatically change the way we read him. This study of the ancient practice of parresia philosophical truth-telling forces us to abandon the view that his late thought was a turn away from politics. The key question in these lectures is the relationship between philosophy and politics: their necessary dependence, but impossible coincidence. The political significance of philosophy was an acute problem for Foucault throughout his life. It remains a definitive question today for anyone concerned with the future of Western political thought and practice." - Johanna Oksala, University of Dundee, UK. "The Government of Self and Others is a fascinating analysis of a notion which is at the center of the philosophical and political enterprise and is highly recommended for specialist and non-specialist scholars alike." - Christopher Forlini, Free University Berlin, Germany.

Author Michel Foucault: Michel Foucault, acknowledged as the pre-eminent philosopher of France in the 1970s and 1980s, continues to have enormous impact throughout the world in many disciplines.