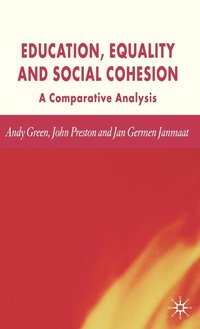 "Andy Green, John Preston and Jan Germen Janmaat have provided a wonderful example of a theoretically and empirically informed social science approach to the study of education policy in this time of globalization." - Bob Lingard, British Journal of Sociology of Education "This is a worthwhile and provocative volume, one that sets a high standard for future comparative research on education and social cohesion, and for mixed method research in education more generally." - Karen Mundy, British Journal of the Sociology of Education "This book offers a highly competent corrective example to pseudo-social economism, on the one hand, and critical culturalism in education, on the other." - Philip Wexler, British Journal of the Sociology of Education "The most relevant outcome of this study for educational policy and praxis is that Green and colleagues argue in a very convincing manner for the significance of the debate on 'education systems' for a German reader this is especially interesting because, even in the aftermath of the catastrophic PISA results for Germany, the huge majority of the members of the political class, and even educationalists, still dare to say that school structure does not count in their defence of the existing German three-tiered system." Heinz Sunker, British Journal of Educational Sociology "an important book with substantial policy implications for a globalizing world." - Anthony Dworkin, International Sociology

ANDY GREEN is Professor of Comparative Education at the Institute of Education, University of London, UK. He has published widely on a range of education issues, with major works translated into Chinese, German, Japanese and Spanish. His published books include High Skills: Globalization, Competitiveness and Skills Formation (with Phil Brown and Hugh Lauder), Convergences and Divergences in European Education and Training Systems (with Alison Wolf and Tom Leney), Education, Globalization and the Nation State and Education and State Formation: The Rise of Education Systems in England, France and the USA. JOHN PRESTON is Senior Lecturer in Citizenship at the University of East London, UK. He has written widely on themes of adult education, social capital and social cohesion. He has conducted consultancy for UNESCO and is currently working on a study of social cohesion and exclusion in the European Commission. JAN GERMEN JANMAAT is a Postdoctoral Fellow at the Institute of Education, University of London, UK, working on projects supported by a Framework Six Marie Curie grant. His research interests include citizenship education and the formation of identities and values among youngsters. He has published in the journals Ethnic and Racial Studies, European Education and Nationalities Papers.