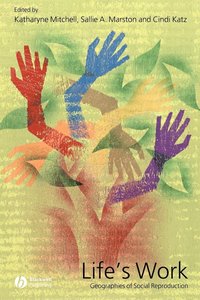 "A fascinating journey through the tangled power relations and layered geographies of social reproduction. The essays are creative, diverse, and internationally thought-provoking." Nancy Folbre, Professor of Economics, University of Massachusetts at Amherst "An inspired, highly readable, and vitally significant collection of papers. In attempting to pull apart and examine "the multiple relations, spaces, practices and possibilities of life's work," it moves considerably beyond the achievements of those who have previously wed feminist, Marxist and postructural theories to address issues of social reproduction." Allan Pred, Professor of Geography, UC Berkeley "A stimulating collection infused with feminist scholarship from the domestic labour debate to embodiment and gendered subjectivities. The collection powerfully documents the changing connections between employment and all those other forms of work that make up the total social organisation of labor. Absolutely essential reading for anyone interested in the diversity of ways of living and making a living in a globalized world." Linda McDowell, Professor of Geography, University College London "With great clarity and a fascinating range of examples, this collection promises to shift our understanding of race, gender, sexuality, nationality, and class in late capitalism." Caren Kaplan, Associate Professor of Women's Studies, UC Berkeley "Some of the chapters are fascinating ... What sets this book apart from others that have wrestled with the production/reproduction boundary is its distinctly multi- and transnational flavour. In the contemporary world social reproduction can be just as 'global' as production has become, and the chapters in Life's Work provide many absorbing and welcome examples." Progress in Human Geography "A wide ranging, hyper(post)modern collection of essays in social and cultural geography...It trips nicely from pen to page" Network "The book's authors extend the social reproduction debates in Marxist, feminist, and development studies by advocating the conceptual importance of economic-social-political complexity, subjectivity, and empirical analysis. The introductory chapter is well-written and would serve as a useful and comprehensible piece for both upper level undergraduate and graduate courses." Annals of the Association of American Geographers

Katharyne Mitchell is an Associate Professor in the Department of Geography at the University of Washington. She is co-editor of The Companion Guide to Political Geography, and has published in the area of immigration, urban geography and transnational studies in journals such as Transactions of the Institute of British Geographers, Society and Space, Antipode, Political Geography, Urban Geography and Economic Geography. She is currently completing a monograph entitled, Transnationalism and the Politics of Space, for Temple University Press. Mitchell's latest research focuses on the impact of transnational migration on conceptions of education, with a particular emphasis on how children are educated to become citizens of a particular nation-state. This ongoing research has been funded by the Simpson Center of the University of Washington, the Spencer Foundation, and the John D. and Catherine T. MacArthur Foundation. Sallie A. Marston is Professor of Geography at the University of Arizona in Tucson. Her work focuses on space, difference and politics. She is the author of numerous articles on urban space and political questions of gender, ethnicity, race and sexuality published in, among others, Transactions of the Institute of British Geographers, Annals of the Association of American Geographers, Progress in Human Geography, Society and Space, Political Geography, Urban Geography. She is on the editorial board of several journals and the author of two textbooks Places and Regions in Global Context: Human Geography and World Regions in Global Context: Peoples, Places, and Environments. She is co-editor of Making Worlds: Gender, Metaphor, Materiality with Susan Aiken, Ann Brigham and Penny Waterstone. She is currently working on a monograph that explores identity politics and new state practices around the spaces of discourse and representation entitled Acting Out in Public: The St. Patrick's Day Parade and Struggles over the Production of Meaning and Identity in the Streets of New York. Cindi Katz is Professor of Geography in Environmental Psychology and Women's Studies at the Graduate Center of the City University of New York. Her work concerns social reproduction and the production of space, place and nature; children and the environment, and the consequences of global economic restructuring for everyday life. She has published widely on these themes as well as on social theory and the politics of knowledge in edited collections and in journals such as Society and Space, Social Text, Signs, Feminist Studies, Annals of the Association of American Geographers, Social Justice, and Antipode. She is the editor (with Janice Monk) of Full Circles: Geographies of Gender over the Life Course (Routledge 1993) and recently completed Disintegrating Developments: Global Economic Restructuring and Children's Everyday Lives forthcoming in 2004 (University of Minnesota Press). She is currently working on a project called Retheorizing Childhood and another on the Social Wage.