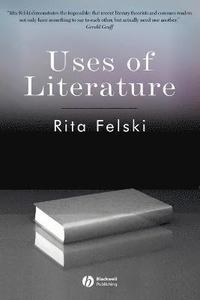 av Rita Felski
Häftad Engelska, 2008-05-01
299
Köp
Spara som favorit
Skickas inom 7-10 vardagar.
Fri frakt inom Sverige för privatpersoner.
Uses of Literature bridges the gap between literary theory and common-sense beliefs about why we read literature. * Explores the diverse motives and mysteries of why we read* Offers four different ways of thinking about why we read literature - for recognition, enchantment, knowledge, and shock* Argues for a new "phenomenology" in literary studies that incorporates the historical and social dimensions of reading* Includes examples of literature from a wide range of national literary traditions
Visa hela texten

"Together, Felski's four short essays on recognition, enchantment, knowledge and shock leave me refreshed, invigorated, and willing to engage with my own reading responses both more critically and more charitably. She does achieve her aim, which is to get 'a better handle on how and why we read.'" (Academic Matters, January 2009) "Felski finds that it is the structural elitism of the literary critics that has given theory its bad name ... .Felski wants to find an 'ordinary' theory of literature and culture that would replace these hermeneutics of suspicion. Her strategy is to outline a theory of literature based on four modes of human interaction--recognition, enchantment, knowledge and shock. She devotes a chapter to each, marshalling a wide range of texts to illustrate her approach ... .The one on 'recognition is convincing'.. .Felski's manifesto is timely." (Times Higher Education Supplement, August 2008) "Felski proposes a pragmatic approach to reading literature. Opposing the exclusive focus on otherness in contemporary literary theory, she offers a correction by balancing otherness with the acknowledgment of the presence of the self in reading literature." (Choice Reviews, December 2008) "A spirited defense of literature, full of ideas which promise to prove invigorating for the future development of literary theory. ... An inspired discussion." (Journal of Literary Theory, 2008)

Rita Felski is the William R. Kenan, Jr. Professor of English and Chair of Comparative Literature at the University of Virginia, and an Associate Editor of New Literary History. She is the author of Beyond Feminist Aesthetics , The Gender of Modernity , Doing Time: Feminist Theory and Postmodern Culture , and Literature After Feminism . She is also editor of Rethinking Tragedy .