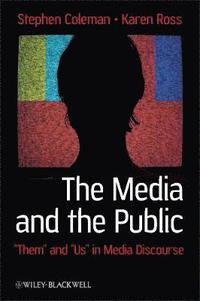 The Media and The Public

"Them" and "Us" in Media Discourse

av Stephen Coleman, Karen Ross
Häftad Engelska, 2010-02-19
559
Köp
Spara som favorit
Finns även som
Visa alla 3 format & utgåvor
The Media and the Public explores the ways a range of media, from the press to television to the Internet, have constructed and represented the public. Provides a new synthesis of recent research exploring the relationship between media and their publics Identifies ways in which different publics are subverting the gatekeeping of mainstream media in order to find a voice and communicate with others Situates contemporary media-public discourse and relationships in an historical context in order to show the origin of contemporary public/political engagement Creates a theoretical expansion on the role of the media in accessing or denying the articulation of public voices, and the ways in which publics are harnessing new media formats to produce richer and more complex forms of political engagement
Visa hela texten

"Stephen Coleman and Karen Ross inspire us to reflect critically on prevailing assumptions we hold about the media and its publics. Their compelling analysis ? written in a clear and accessible ? charts new directions for understanding the dynamics of contemporary democracy." Peter Dahlgren, Lund University

Stephen Coleman is Professor of Political Communication and Co-Director of the Centre for Digital Citizenship, Institute for Communications Studies, University of Leeds. He is the author of The Internet and Democratic Citizenship: Theory, Practice, and Policy (with Jay G. Blumler, 2009) and Public Trust in the News: A Constructivist Study of the Social Life of News (with David Morrison and Scott Anthony, 2009). Karen Ross is Professor of Media and Public Communication at the University of Liverpool. She has written and edited many books, including Gendered Media: Women, Men and Identity Politics (2009), Popular Communication: Essays on Publics, Practices and Processes (2008), Rethinking Media Education: Critical Pedagogy and Identity Politics (2007), and Women and Media: Critical Issues (Wiley-Blackwell, 2006).