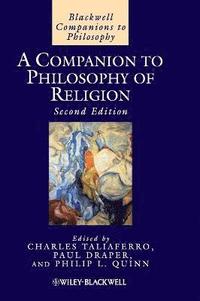 A Companion to Philosophy of Religion

Overall, this work is an effective introduction into ananalytical approach to the philosophy of religion, with enoughother perspectives included to provide a good starting point forother research. A great textbook for any philosophy of religion orreligious studies course, that remains a useful reference pointoutside of the classroom context. (Philosophy,Religion and Science Book Reviews, 5 April 2014) "All in all, specialists and nonspecialists alike will find thisguide to the discipline a readily accessible and immensely valuableresource. Summing Up: Essential. Upper-level undergraduates throughfaculty/researchers." (Choice, 1July 2011)

Bloggat om A Companion to Philosophy of Religion

Charles Taliaferro is professor of philosophy at St. Olaf College and the author or editor of eleven books, including Evidence and Faith: Philosophy and Religion since the Seventeenth Century (2005). He is on the editorial board of American Philosophical Quarterly, Philosophy Compass, Sophia, and Religious Studies, and has been a visiting scholar at NYU and Oxford, Princeton, and Columbia Universities. Paul Draper is professor of philosophy at Purdue University and a former president of the Society for Philosophy of Religion. He is the author of the article "Pain and Pleasure: An Evidential Problem for Theists" in Nous (1989) and the editor of God or Blind Nature? Philosophers Debate the Evidence (2007). He is editor of Philo: A Journal of Philosophy and serves on the editorial boards of International Journal for Philosophy of Religion and Faith and Philosophy. Philip L. Quinn (1940-2004) was John A. O'Brien Professor of Philosophy at the University of Notre Dame, Indiana. He was author of Divine Commands and Moral Requirements (1978) and of numerous articles in philosophy of religion, philosophy of science, theoretical physics, religious ethics, metaphysics, epistemology, value theory, political philosophy, and philosophy and literature.