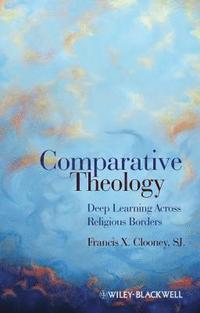 av Francis X Clooney
Häftad Engelska, 2010-03-16
279
Köp
Spara som favorit
Finns även som
Visa alla 3 format & utgåvor
Drawing upon the author s three decades of work incomparative theology, this is a pertinent and comprehensiveintroduction to the field, which offers a clear guide to thereader, enabling them to engage in comparative study. * The author has three decades of experience of work in the fieldof comparative theology and is ideally placed to write thisbook * Today s increasing religious diversity makes this apertinent and timely publication * Unique in the depth of its introduction and explanation of thediscipline of comparative theology * Provides examples of how comparative theology works in the newglobal context of human religiosity * Draws on examples specific to Hindu-Christian studies to showhow it is possible to understand more deeply the wider diversityaround us. * Clearly guides the reader, enabling them to engage incomparative study
Visa hela texten

"But as this volume suggests, our interreligious milieu provides a new impetus not just for learning about our neighbors' faiths but learning from them. Francis X. Clooney, S.J., is a most trustworthy guide." (The National Catholic Weekly, September 2010) "Clooney's book thus provides an extremely needful, as well as accessible, contribution to the furthering of this developing discipline, and as such it is a very valuable piece of scholarship." (American Theological Inquiry, July 2010)

Francis X. Clooney, S.J., is Parkman Professor of Divinity at Harvard University. His primary areas of scholarship are theological commentarial writings in the Sanskrit and Tamil traditions of Hindu India, and the developing field of comparative theology. He was the first president of the International Society for Hindu-Christian Studies, and, from 1998 to 2004, was coordinator for interreligious dialogue for the Jesuits of the United States. Professor Clooney is the author of numerous articles and books, including Hindu God, Christian God (2001), Divine Mother, Blessed Mother (2005), Jesuit Postmodern: Scholarship, Vocation, and Identity in the 21st Century (2006), Beyond Compare: St. Francis and Sri Vedanta Desika on Loving Surrender to God (2008), and The Truth, the Way, the Life: Christian Commentary on the Three Holy Mantras of the Srivaisnava Hindus (2008).