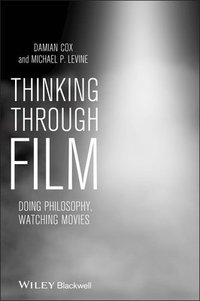 Thinking Through Film provides the best introduction available to the diverse relationships between film and philosophy. Clearly written and persuasively argued, it will benefit students of both film and philosophy. Thomas E. Wartenberg, Mount Holyoke College Cox and Levine's admirable Thinking Through Film picks up where Philosophy Goes to the Movies left off, arguing that films not only do philosophy but, in some cases, do it better than philosophers! The result is a rich and rewarding examination of films-from metaphysical thought experiments, personal identity puzzles, to reflections on the meaning of life-that shows, in bracing, no-nonsense fashion, how popular cinema can do serious philosophy. Roger Sinnerbrink, Macquarie University

Damian Cox is Senior Lecturer in Philosophy at Bond University. He is co-author of Integrity and the Fragile Self with Michael Levine and Marguerite La Caze in 2003. Cox has written widely on philosophical topics including ethics, value theory, metaphysics and epistemology. Michael Levine is professor of Philosophy at the University of Western Australia, and has co-authored Politics Most Unusual: Violence, Sovereignty and Democracy in the War on Terror' with Damian Cox and Saul Newman (2009). He is currently working on the topic of the role of regret and self-assessment in our moral lives.

Preface vii Acknowledgments x Part I Philosophy and Film 1 1 Why Film and Philosophy? 3 2 Philosophy and Film Spectatorship 23 Part II Epistemology and Metaphysics 47 3 Knowing What's What in Total Recall 49 4 Ontology and The Matrix 65 5 It's All in the Mind: AI Artifi cial Intelligence and Robot Love 79 6 La Jetee and the Promise of Time Travel 98 Part III The Human Condition 113 7 Fate and Choice: The Philosophy of Minority Report 115 8 Personal Identity: The Case of Memento 132 9 The Spectacle of Horror: Funny Games 147 10 Looking for Meaning in All the Wrong Places: Ikiru ("To Live") 170 Part IV Ethics and Values 189 11 Crimes and Misdemeanors and the Fragility of Moral Motivation 191 12 The Lives of Others: Moral Luck and Regret 209 13 The Dark Knight: Batman on Deontology and Consequentialism 228 14 Dangerous Childhood: La Promesse and the Possibility of Virtue 245 Index 265