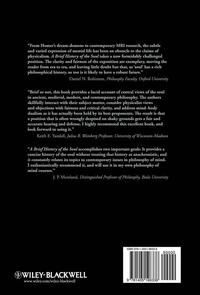 A Brief History of the Soul

av Stewart Goetz, Charles Taliaferro
Inbunden Engelska, 2011-04-08
809
Köp
Spara som favorit
Skickas inom 10-15 vardagar.
Fri frakt inom Sverige för privatpersoner.
Kan tyvärr inte längre levereras innan jul.
Finns även som
Visa alla 3 format & utgåvor
This book is a clear and concise history of the soul in western philosophy, from Plato to cutting-edge contemporary work in philosophy of mind. * Packed with arguments for and against a range of different, historically significant philosophies of the soul * Addresses the essential issues, including mind-body interaction, the causal closure of the physical world, and the philosophical implications of the brain sciences for the soul's existence * Includes coverage of theories from key figures, such as Plato, Aquinas, Locke, Hume, and Descartes * Unique in combining the history of ideas and the development of a powerful case for a non-reductionist, non-materialist account of the soul
Visa hela texten

Although they may well have their own agenda, Goetz and Taliaferro not only provide an extremely useful chronological account of how the concept of the soul developed, they also illuminate the questions it was meant to solve, and the way these are not yet satisfactorily laid to rest. (Times Higher Education Supplement, 5 July 2012) "This is a courageous book: it takes up and defends a position to which the current intellectual climate it generally hostile, namely that human beings are embodied souls. The book's very title throws down a challenge to the philosophical establishment. Nonetheless, even the most resolute enemies of dualism will welcome Stuart Goetz and Charles Taliaferro's overview of historical and contemporary positions on the existence and nature of the soul." (Anthony Kenny, The Times Literary Supplement, December 16, 2011). "So the book remains firmly within orthodox philosophy and science, although within these limits it can be highly recommended." (Network Review, 1 June 2011)

Stewart Goetz is Ross Frederick Wicks Distinguished Professor in Philosophy and Religion at Ursinus College. He has written extensively on the philosophy of mind and action theory and his books include Freedom, Teleology, and Evil (2008), Naturalism (with Charles Taliaferro, 2008), and The Soul Hypothesis (edited with Mark Baker, 2011). Charles Taliaferro is Professor of Philosophy at St. Olaf College. He is on the editorial board of the American Philosophical Quarterly, Religious Studies, Sophia, and Philosophy Compass. His books include Consciousness and the Mind of God (1994, 2004), Naturalism (with Stewart Goetz, 2008), A Companion to Philosophy of Religion, 2nd edition (edited with Paul Draper, Wiley-Blackwell, 2010), and The Image in Mind (with Jil Evans, 2010).

Acknowledgments ix Introduction 1 1 The Soul in Greek Thought 6 2 The Soul in Medieval Christian Thought 30 3 The Soul in Continental Thought 65 4 The Soul in Locke, Butler, Reid, Hume, and Kant 105 5 The Problem of Soul Body Causal Interaction 131 6 The Soul and Contemporary Science 152 7 Contemporary Challenges to the Soul 182 8 Thoughts on the Future of the Soul 202 Bibliography 216 Index 225