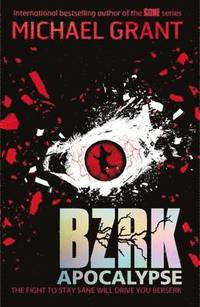 av Michael Grant
Häftad Engelska, 2014-05-08
95
Köp
Spara som favorit
Finns även som
Visa alla 4 format & utgåvor
This is the explosive conclusion to the BZRK trilogy, from the author of Gone. Noah and Sadie have seen death, and it holds no fear for them. Madness does, though. And losing each other. But they will not sit back, helpless witnesses to an invisible apocalypse. The world is being destroyed from the inside out. It's time to take up the fight once more, in the streets and in the nano. And they'll give everything they have to stop the Armstrong Twins. But are the Twins the ultimate enemy? Nobody has ever known the identity of Lear, the shadowy leader of BZRK. Just who have they been fighting for? As madness spreads like a plague, one thing becomes terrifyingly clear: this was Lear's game all along. And Lear hasn't been playing fair.
Visa hela texten

Michael Grant has always been fast-paced. He's lived in almost 50 different homes in 14 US states, and moved in with his wife, Katherine Applegate, after knowing her less than 24 hours. Michael and Katherine have co-authored more than 100 books, including the hit series Animorphs and ultra-modern mystery thriller, Eve & Adam. Michael is also the author of bestselling YA series, GONE. Michael, Katherine and their two children live in the San Francisco Bay Area, not far from Silicon Valley. Michael can be contacted via Twitter @thefayz, Facebook (authormichaelgrant) and via email at Michael@themichaelgrant.com