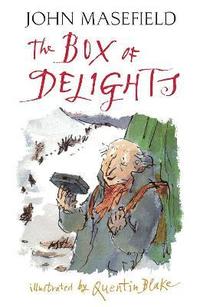 The Box of Delights

av John Masefield
Häftad Engelska, 2014-03-10
109
Köp
Spara som favorit
Finns även som
Visa alla 4 format & utgåvor
And now, Master Harker, now that the Wolves are Running, perhaps you could do something to stop their Bite?' A magical old man has asked Kay to protect the Box of Delights, a Box with which he can travel through time. But Kay is in danger: Abner Brown will stop at nothing to get his hands on it. The police don't believe Kay, so when his family and the Bishop are scrobbled up just before Christmas, he knows he must act alone ... John Masefield's classic children's book is considered to be one of the great works of modern children's fiction. Magical, fantastical and filled with vivid, rich characters - brought to life in this edition by Quentin Blake's stunning artwork - The Box of Delights and its sequel The Midnight Folk are a must-read for any child. A genuine fantasy classic in the tradition of Peter Pan, Alice's Adventures in Wonderland or The Wonderful Wizard of Oz. If you like Harry Potter, you'll love this. A wonderful book for early readers aged 8 and up. Recently adapted for the stage by Piers Torday, bestselling author of The Last Wild. 'Two of the greatest children's books ever written' - The Times on The Box of Delights and The Midnight Folk.
Visa hela texten

John Masefield was born in 1878 in Hertfordshire. After leaving school he went to sea, but deserted his ship when the urge to write professionally overtook him. He spent two years doing odd jobs in New York whilst learning his craft as a writer. He moved back to England in 1897. After serving in the First World War, Masefield became a full time writer, writing many popular novels and collections of poetry, including the children's novels The Box of Delights and The Midnight Folk.