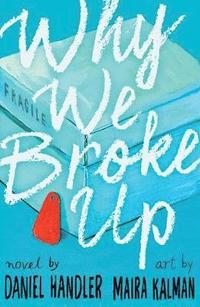 Why We Broke Up

av Daniel Handler
Häftad Engelska, 2015-06-04
Unga vuxna
95
Köp
Spara som favorit
Finns även som
Visa alla 2 format & utgåvor
"I'm telling you why we broke up, Ed. I'm writing it in this letter, the whole truth of why it happened." From the author of The Basic Eight comes a novel the Telegraph hailed as 'A poignant tale of adolescent heartbreak'. Min Green and Ed Slaterton are breaking up, so Min is writing Ed a letter and giving him a box. Inside the box is why they broke up. Two bottle caps, a movie ticket, a folded note, a box of matches, a protractor, books, a toy truck, a pair of ugly earrings, a comb from a motel room, and every other item collected over the course of a giddy, intimate, heartbreaking relationship. A wonderful read for anyone who was captivated by David Levithan's The Lovers Dictionary or Jenny Han's P.S. I Still Love You. A classic of young adult fiction that will resonate with anyone who has ever had their heart broken. "Beautifully rendered... - New York Times Book Review DANIEL HANDLER has written for grown-ups under his own name and for younger readers under the name Lemony Snicket ('A Series of Unfortunate Events' and 'All The Wrong Questions'). He was dumped at least three times in high school. MAIRA KALMAN acclaimed artist and designer, has created many books for both grown-ups and children. Her heart was broken in high school by a boy who looked like Bob Dylan.
Visa hela texten

"Sure to resonate with all young adults."-- "Library Media Connection" * "Kalman's spare illustrations ofthe objects heighten the overall enjoyment and perfectly complement Handler'saccomplished prose."-- "The Horn Book", starred review * "Characters are vivid, and their portrayal is enriched by realistic dialogue....Hander offers a heartbreaking, bittersweet, and compelling romance with a unique angle and flare." ""School Library Journal", starred review"" * "As objects from the box are revealed in Kalman's vividly rendered paintings, readers are taken beneath the surface of what will no doubt be one of the most talked-about romances in teen literature....A poignant, exhilarating tale of a love affair gone to the dogs." ""Kirkus Reviews", starred review"" * "Handler is at his best when he's creating verbal collages of ordinary, recognizable high-school moments....Like the perfect breakup song, this turns the searing experience of losing your heart into a cathartic work of art." ""The Bulletin", starred review"" * "Kalman's spare illustrations of the objects heighten the overall enjoyment and perfectly complement Handler's accomplished prose." ""The Horn Book", starred review"" "The Lemony Snicket author (writing under his own name) convincingly inhabits the mind of Min, a teenage girl reeling from her first heartbreak. This poignant, bittersweet novel centers on a box of objects infused with memories of her brief, unforgettable love." ""Entertainment Weekly""" * "A bittersweet diatribe of their break-up arranged around objects....all the more powerful because of how they evoke truth more than any mere relaying of facts." ""Booklist", starred review"" * "Handler shows exceptional skill at getting inside Min's head and heart...lending real pathos to Min's memorabilia and making her sorrow all the more palpable." ""Publishers Weekly", starred review"" "It's easy to predict how Handler's story will conclude from the book's few pages. It's more difficult to take such an everyday tragedy with a predictable ending and elevate it to an end point of enduring, emotionally effective art." ""Los Angeles Times"""

Daniel Handler is the author of the best-selling 'A Series of Unfortunate Events' (under the pen name of Lemony Snicket), a collection of books for children. He has also written various screenplays, and three books for adults: 'Basic Eight', 'Watch Your Mouth', 'How to Dress for Every Occasion, by the Pope' and 'Adverbs'. He lives in San Francisco.