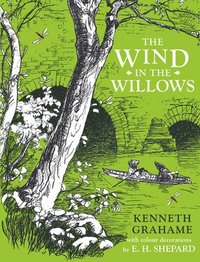 av Kenneth Grahame
Inbunden Engelska, 2020-03-05
6-9 år
170
Köp
Spara som favorit
Finns även som
Visa alla 8 format & utgåvor
One of the most famous animal stories of all time, The Wind in the Willows is a classic that has been entertaining children and adults alike for over a hundred years. The Wild Wood seems a terrifying place to Mole, until one day he pokes his nose out of his burrow and finds it's full of friends. He meets brave Ratty, kind old Badger and the rascally Mr Toad, and together they go adventuring ... but the Wild Wood doesn't just contain friends, there are also the sinister weasels and stoats, and they capture Toad Hall when Mr Toad is in jail. How will he escape? And can the friends fight together to save Toad Hall? Kenneth Grahame's The Wind in the Willows is a classic animal adventure that charms and enthrals. This hardback edition contains the original full-colour illustrations by E H Shepard, a partnership that has never been bettered. A perfect gift for children aged 9 and above.
Visa hela texten

KENNETH GRAHAME was born in Edinburgh in 1859 and grew up in Berkshire. He started work at the Bank of England in 1879 and retired as its Secretary in 1908, the year that The Wind in the Willows was first published. The book was based on bedtime stories he told his son Alistair, who is said to have been the inspiration for the much-loved character of Toad. E.H. SHEPARD was born in London in 1879. He won a scholarship to the Royal Academy Schools and later worked for Punch magazine as a cartoonist and an illustrator. Shepard illustrated many books for adults and children, including A.A. Milne's Winnie-the-Pooh. Shepard's characterful illustrations of Mole, Ratty, Badger and Toad, first published in 1931, have become an inseparable part of The Wind in the Willows, and are classics in their own right.