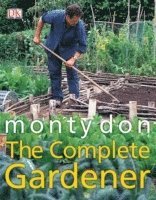 A Practical, Imaginative Guide to Every Aspect of Gardening

av Monty Don
(1 röst)  |  Läs 1 recension
Häftad Engelska, 2009-03-02
269
Köp
Spara som favorit
Skickas inom 5-8 vardagar.
Fri frakt inom Sverige för privatpersoner.
Finns även som
Visa alla 1 format & utgåvor
Written with passion and packed with practical information, Monty Don's The Complete Gardener is a must-read for anyone who wants to learn how to garden. Here, Monty reveals the secrets of growing vegetables, fruits, flowers, and herbs while respecting the needs of the environment by gardening organically. Grounded in his own experience, Monty's straightforward gardening advice is paired with extraordinarily beautiful photographs taken over the course of a year in his own Herefordshire garden, taking you on a tour of his flower garden, herb garden, kitchen garden, and more.
Visa hela texten

After a sightseeing tour of world gardens, Monty is back home in his garden in Herefordshire - and we're invited! In a beautifully photographed DK book, Monty shows us his organic gardening secrets to achieving a plentiful show of plants and produce while respecting the environment. -- Veronica Leek, senior buyer in Foyles' natural history department * The Bookseller * 'It boasts a wealth of horticultural knowledge...a must for any keen organic gardener * Alan Titchmarsh *

Monty Don has been gardening on TV for over 25 years for ITV, Channel 4 and the BBC, and since 2003 has been the lead presenter on BBC TV's Gardeners' World, which from 2011 has been filmed in his own garden in Herefordshire, Longmeadow. He is an experienced organic gardener and was President of the Soil Association from 2008 to 2017. He has written a weekly gardening column for the Daily Mail since 2004, and published 19 books, including Down to Earth, the top-selling gardening book in the UK from 2017 to 2019.