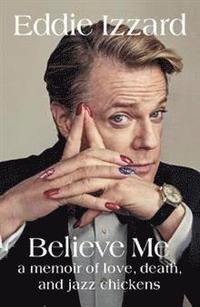 A Memoir of Love, Death and Jazz Chickens

av Eddie Izzard
Häftad Engelska, 2018-05-31
119
Köp
Spara som favorit
Skickas inom 5-8 vardagar.
Fri frakt inom Sverige för privatpersoner.
Finns även som
Visa alla 3 format & utgåvor
"Don't get somewhere as fast as possible. Get somewhere as good as possible" Star of stage and screen. Tireless supporter of charity. Marathon runner. Political campaigner. Fashion icon. Human. There is no one quite like Eddie Izzard. This is the story of how he broke through. His relentless optimism has led him to always do things his own way, even if it didn't work first time, and his incredible self-belief has pushed him to keep on trying, even if it didn't work the second or third time either. Whether he was putting on teddy bear shows on boarding school beds or swordfighting on the streets of London, Eddie never stopped trying to achieve his dreams of becoming a performer. Brimming with his distinctively surreal humour and disarming candour, Believe Me tells the story of a boy who never took no for an answer. "This book is a raw, honest exploration of what it means to live your truth, to be unapologetically ambitious. It's about being brave. And hilarious." Chelsea Handler 'King of the Universe . . . Comic genius . . . Entertainment incarnate' Telegraph "Laughter trumps sorrow in candid comedian Eddie Izzard's Believe Me" Vanity Fair
Visa hela texten

A consistent intelligence underpins Izzard's whimsy * Chortle * The funniest man in, well, pretty much all of the known universe * Los Angeles Times * The funniest man in England -- John Cleese Izzard has a knack for reducing centuries' worth of history to just a few exquisite words (the Romans were just 'fascist plumbers', for example) * Time Out * A comedy gem * Guardian * Izzard is Wikipedia in heels. He's made his career out of hilarious, dizzying, surreal routines held up by their own daft logic . . . A force of nature * Radio Times * King of the Universe . . . Comic genius . . . Entertainment incarnate * Telegraph *

Eddie Izzard is a world-renowned comedian, actor, writer, runner, and activist. He made his West End debut in 1993 in a one-man show called Live at the Ambassadors, for which he received an Olivier Award nomination for Outstanding Achievement. He recently appeared on television as Dr Abel Gideon in Hannibal, and he produced and starred in the FX Networks series The Riches. His films include Valkyrie; Ocean's Thirteen and Ocean's Twelve; Across the Universe; Mystery Men; Shadow of the Vampire; The Cat's Meow; Lost Christmas; Castles in the Sky; and Whisky Galore! His stage appearances include David Mamet's Race and The Cryptogram; the title role in Marlowe's Edward II; 900 Oneonta; and A Day in the Death of Joe Egg in London and on Broadway, which garnered him a Tony nomination for Best Actor. Izzard's hit one-man shows include Dress to Kill, Stripped, and Force Majeure. His performance in Dress to Kill earned him two Emmy Awards. In 2010, the documentary Believe: The Eddie Izzard Story received an Emmy nomination. In 2009, Izzard ran forty-three marathons in fifty-one days throughout the United Kingdom, and in 2016, he ran twenty-seven marathons in twenty-seven days across South Africa in honour of Nelson Mandela's twenty-seven years in prison. By running these seventy marathons he has helped raise GBP4.8 million ($6 million) for the UK charity Sport Relief.