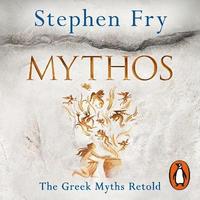 av Stephen Fry
CD-bok Engelska, 2017-10-27
262
Köp
Spara som favorit
Finns i lager! Skickas inom 1-2 vardagar.
Fri frakt inom Sverige för privatpersoner.
Finns även som
Visa alla 4 format & utgåvor
Penguin presents the unabridged audio CD edition of Mythos written and read by Stephen Fry. THE TIMES AUDIOBOOK OF THE WEEK 'Perfect for the 21st Century. Ebullient, funny, Fry retells the Greek myths with elegance' The Times 'A cracking good story' The Times Literary Supplement 'A wondrous new immersion in ancient stories we only thought we knew. Page to page, Mythos is brilliant, funny, erudite, inventive, surprising and enthralling' Richard North Patterson 'Fry's lively writing certainly conveys his lifelong passion for Greek myths . . . It's a rollicking good read' The Independent _________ No one loves and quarrels, desires and deceives as boldly and brilliantly as Greek gods and goddesses. They are like us, only more so - their actions and adventures scrawled across the heavens above. From the birth of the universe to the creation of humankind, Stephen Fry - who fell in love with these stories as a child - retells these myths for our tragic, comic, fateful age. Witness Athena born from the cracking open of Zeus's great head and follow Persephone down into the dark realm of Hades. Experience the terrible and endless fate of Prometheus after his betrayal of Zeus and shiver as Pandora opens her jar of evil torments. The Greek gods are the best and worst of us, and in Stephen Fry's hands they tell us who we are. Mythos - smart, funny, and above all great fun - is the retelling we deserve by a man who has been entertaining the nation for over four decades. 'A cracking good story' The Times Literary Supplement
Visa hela texten

National Treasure: noun - someone or something regarded as emblematic of a nation's cultural heritage, such as Stephen Fry * Oxford English Dictionary * The patron saint of British intelligence * Daily Telegraph * Arguably the greatest living Englishman * Indendent on Sunday * Brilliant . . . Stephen Fry's writing style makes it appealing to all. There's something for everyone * The Herald * Mythos has the gripping nature that one would hope for from a modern blockbuster. Filled with a sharp and delightful sense of humour, Stephen Fry's many witticisms making it an even more enjoyable read. I would recommend it for so many reasons * The National * I quite like Mythos, Stephen Fry's book on the Greek myths - he makes them amusing. I like people that illuminate the past with humour -- Jools Holland Fresh revivals of the myths of ancient Greece. In his own imitable style, Fry takes an erudite look at the doings of gods, goddesses, kings, queens and ordinary mortals * The Bay * Fry takes us from Zeus to Athena with humour. The Greek gods of the past become relatable as pop culture, modern literature and music are woven throughout. Joyfully informal yet full of the literary legacy * Guardian * Lively, humorous and intimate, this retelling has real charm * The Guardian * [Fry] exhibits prodigious learning, a great facility with words, and enormous erudition and enthusiasm * Mail on Sunday * A wondrous new immersion in ancient stories we only thought weknew. Page to page, Mythos is brilliant, funny, erudite, inventive, surprising and enthralling -- Richard North Patterson * - * Perfect for the 21st Century. Ebullient, funny, Fry retells the Greek myths with elegance * The Times * Mythos is Stephen's vivid retelling of the Greek myths. Bringing to life the Gods, monsters and mortals of Ancient Greece, he reimagines their astonishing stories for the modern world. * Express and Star * Fry reimagines the Greek myths with wit, warmth and humanity, bringing them into the modern age. A welcome addition to any bookshelf * Book Bag * Fry's lively writing certainly conveys his lifelong passion for Greek myths . . . It's a rollicking good read * The Independent * Mythos is the best thing he's written since his superb first novel . . . it is entertaining and edifying - one cannot really ask for more than that * The Telegraph * Wit and erudition are impressively evident . . . Read by Fry with his accustomed ebullient showmanship [he] gives the legends modern resonance by telling them with a contemporary colloquial twist' -- AUDIOBOOK of the WEEK * The Times * The Greek myths are told to you here by the ever-soothing voice of Stephen Fry, who takes you from Zeus to Athena with his typical humour. The Greek gods of the past become relatable as pop culture, modern literature and music are woven throughout. It is joyfully informal yet full of the literary legacy threaded through so much of the tapestry of contemporary Greece * The Guardian *

Stephen Fry is an award-winning comedian, actor, presenter and director. He rose to fame alongside Hugh Laurie in A Bit of Fry and Laurie (which he co-wrote with Laurie) and Jeeves and Wooster, and was unforgettable as General Melchett in Blackadder. He has hosted over 180 episodes of QI, and has narrated all seven of the Harry Potter novels for the audiobook recordings. He is the bestselling author of four novels - The Stars' Tennis Balls, Making History, The Hippopotamus and The Liar - as well as three volumes of autobiography - Moab is My Washpot, The Fry Chronicles and More Fool Me. Mythos and Heroes, his retelling of the Greek myths, are both Sunday Times bestsellers.