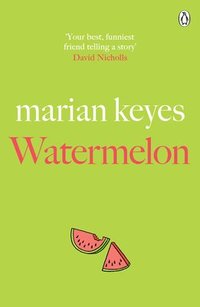 From the No. 1 bestselling author of Grown Ups

av Marian Keyes
(1 röst)
Häftad Engelska, 2017-07-06
102
Köp
Spara som favorit
Finns även som
Visa alla 1 format & utgåvor
Discover the riotously funny, tender and touching debut from the No. 1 bestselling author of Grown Ups 'A modern fairy tale, full of Keyes's self-deprecating wit' Sunday Mirror 'Reading a novel by Marian Keyes is like sitting at the kitchen table with your nicest, most confiding friend' Daily Mail ___________ Meet Claire Walsh. On the day she gives birth to her first child, Claire's husband James tells her he's been having an affair, and that now's the right time to leave her. Right for who exactly? Exhausted, tearful and a tiny bit furious, Claire doesn't know what to do. So she decides to go back to basics . . . and runs home to Mum and Dad. But it's not the sanctuary she'd been hoping for. Juggling her sisters' drama, her parents' pity and the demands of a baby, Claire desperately misses the way things were. So when James gets back in touch, eager to put things right, Claire faces a choice. Will she forgive and forget? Or can she find the courage to take a chance on herself, and start a life of her own? Love the Walsh sisters? Don't miss out on the eagerly awaited sequel to Rachel's Holiday: AGAIN, RACHEL . . . _________ 'A warm and hilarious page turner' Good Housekeeping 'Gloriously funny' Sunday Times 'Keyes is in a class of her own' Daily Express FAMOUS FANS AND WHY THEY LOVE MARIAN KEYES 'Marian's writing is the truth. With big laughs' Dawn French 'A giant of Irish writing' Naoise Dolan 'Will make you laugh and make you cry, but will also reveal the truth of who you really are' Louise O'Neill 'Keyes weaves the joy and pain of life in a unique and magical way' Cathy Rentzenbrink 'One of the most honest writers writing today' Pandora Sykes 'Compassionate, tender, incisive writing' Lucy Foley 'Her talent for tackling serious issues with such humanity and wit is balm for the soul' Nigella Lawson 'Marian Keyes is a brilliant writer. No one is better at making terrifically funny jokes while telling such important, perceptive and agonizing stories of the heart. She is a genius' Sali Hughes 'Irresistible, profound. Keyes's comic gift is always evident' Independent 'Joyful. Keyes' clever way with words and extraordinary wit. People stared at me as I laughed to myself' C.L. Taylor 'A born storyteller' Independent on Sunday
Visa hela texten

Watermelon, Marian Keyes's very first novel, tells the extremely funny and wonderfully touching tale of a woman who thought she had it all - until the day she discovers that it's all gone . . . 'Failed relationships can be describe as so much wasted makeup . . .' On the day she gives birth to her first child, Claire Walsh's husband James tells her he's been having an affair and now's the right time to leave her. * from the publisher's description * Keyes gives popular fiction a good name * Independent on Sunday * Full of twists and turns, with warmth and humour on every page, it doesn't disappoint * Closer * A smart new drama from the awesome Marian Keyes * Heat * Not only is it a great story with funny, loveable characters, it made me laugh out loud * Stylist * Keyes manages to have you alternately blubbing and belly-laughing to the final page * Company * One of those rare books that will swallow up your day without realising it. Romantic and uplifting it won't fail to put a smile on your face. Marian Keyes is back to her best * The Daily Express * A modern fairy tale, it's full of Keyes's self-deprecating wit * The Sunday Mirror * One of the 40 books to read before you're 40. Pure craic * Image * So fresh . . . a story about a world I really recognised -- Sophie White

Marian Keyes is a phenomenon. The multimillion copy, internationally bestselling author of some of the most widely loved, genre-defying novels of the past thirty years - including Watermelon, Anybody Out There and Grown Ups - has millions of fans around the world. They are irresistibly drawn by her warmth and wit, fearless honesty, relatable characters and relationships, and sheer storytelling magic. Not only has Marian inspired and entertained countless readers, but also the next generation of writers too. As a beloved author herself, Marian is a passionate champion of storytellers everywhere, playing an active role in encouraging new voices. She has been the chair of judges for the Comedy Women in Print prize, a sponsor of the Curtis Brown Creative Novel-Writing Scholarship, and most recently ran her own hugely popular Instagram Live series bringing free creative writing courses to thousands of viewers. Marian also uses her position to raise some of the most challenging issues of our time, including addiction, immigration, depression, domestic violence and the Repeal the Eighth campaign. Both critically acclaimed and commercially unstoppable, Marian's fifteenth novel, Again, Rachel - the sequel to her groundbreaking novel Rachel's Holiday - was a No. 1 bestseller in four global territories: UK, Ireland, South Africa and New Zealand, and a No. 1 Audible bestseller. In addition to her novels, Marian has written two collections of journalism, one of which was used as the inspiration of her hit BBC Radio 4 show Between Ourselves. She also co-presents the popular BBC Radio 4 podcast Now You're Asking with actress Tara Flynn, which has been praised by Guardian for its' warm-hearted joy'. Marian is based in Dun Laoghaire, Dublin.