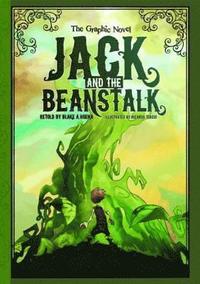 Jack and the Beanstalk

av Blake A Hoena
Häftad Engelska, 2012-09-01
6-9 år
89
Köp
Spara som favorit
Skickas inom 3-6 vardagar.
Fri frakt inom Sverige för privatpersoner.
When Jack sells his family's cow for magic beans, his mother is anything but pleased. Soon, however, the beans sprout into a towering beanstalk. It leads to a castle filled with gold and other treasures. Jack's family will be rich, if he can sneak past the man-eating giant!
Visa hela texten

Bloggat om Jack and the Beanstalk

Blake A. Hoena grew up in central Wisconsin, where, in his youth, he wrote stories about robots conquering the Moon and trolls lumbering around in the woods behind his parent's house - and the fact that the trolls were hunting for little boys had nothing to do with Blake's pesky younger brothers. Later, he moved to Minnesota to pursue a Masters of Fine Arts degree in Creative Writing from Minnesota State University, Mankato. Since graduating, Blake has written more than forty books for children, including retellings of "The Legend of Sleepy Hollow" and the Perseus and Medusa myth. Most recently, he's working on graphic novels for Sports Illustrated Kids and writing stories about superheroes. Ricardo Tercio is a freelance illustrator from Lisbon, Portugal. He co-founded a production company and has made animation and videos for some of the top Portuguese musicians. Tercio also illustrated for large companies such as Hasbro toys. In 2007, he illustrated his first comic, Spider-Man Fairy Tales #1, for Marvel.