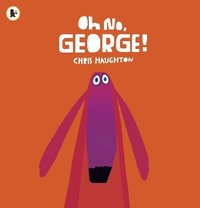 av Chris Haughton
Häftad Engelska, 2013-02-11
129
Köp
Spara som favorit
Skickas inom 3-6 vardagar.
Fri frakt inom Sverige över 159 kr för privatpersoner.
Finns även som
Visa alla 2 format & utgåvor
It's hard work being good all the time - and it's especially hard for a dog like George! A laugh-out-loud, visual romp from the acclaimed author-illustrator of A Bit Lost and Shh! We Have a Plan. In this hilarious read-aloud by the multiple award-winning author-illustrator of A Bit Lost and Shh! We Have a Plan, Harris is off to do some shopping. "Will you be good, George?" he asks his dog. George hopes he can. He really wants to ... but chocolate cake is just so very delicious and he does love to chase cat... What will George do now? Shortlisted for the Kate Greenaway Medal and the Roald Dahl Funny Prize, Chris Haughton's distinctive artwork perfectly accompanies the innocent charm of affable George, a dog trying to be good - with hilarious results!
Visa hela texten

Hilarious . . . young children will delight in George's attempts to behave in the face of life's many distractions -- Steve Voake * Well's Life * A very funny picture book . . . charming * Lytham St Anne's Express * Lots of fun * Lytham St Annes Express * This is a visual romp * Independent * Glorious, vibrant, expressive illustrations * CBI recommended reads of 2012 * With his strong vibrant colours, lively characters and distinctive writing style, Chris Haughton is quickly becoming one of our best new illustrators. * We Love This Book * I think I have been in love with George from the moment the book publicist showed me the proofs of this book. Finally published, we can tell you about this lovely rogue. He tries to be good but it's hard work, especially when there's a cat to chase and a cake to devour... * Angels and Urchins * Set to a gorgeously rich colour palette of purples, orange and deep crimson, this is a delightfully playful tale with minimal text but oodles of personality that shows how the best intentions can go awry. * Junior * The pictures are bold, dashing and minimalist against brilliant orange. The writing is cannily judged for reading aloud * Guardian * Howlingly funny, its luridly elegant illustrations will be in frequent demand; ideal for parents and grandparents to read aloud. * Times *

Chris Haughton is an Irish designer and illustrator. His debut picture book, A Bit Lost, is published into 19 different languages worldwide and has won 13 awards in nine countries, including the Dutch Picture Book of the Year and CBI Book of the Year. His second title, Oh No, George! won the Junior Design Award and was shortlisted for the Kate Greenaway Award. His third picture book, Shh! We Have a Plan, won the Specsavers Irish Children's Book of the Year Junior Award 2014 as well as the Ezra Jack Keats New Illustrator Award in the US. His first app, Hat Monkey, was released in 2014. Chris was also listed in TIME magazine's DESIGN 100 for his work with the fair trade company People Tree and he co-founded NODE, a fair trade social business, in 2012. He lives in East London. Find Chris online at www.chrishaughton.com and on Twitter as @chrishaughton.